-Make paper baskets (use yarn as a handle) and place real or silk flowers in each basket. Hang them on door knobs of neighbors and family members but don’t let them know you did it!

-If you have children, make necklaces out of diasies and place them around their necks for the day to bring protection to them.

-Begin planting for the season.

-Create a MayPole and dance around it with your family or friends.

-Make a dish of fruits, berries, nuts and leave in the wood for the animals and fae folk to enjoy

– This is a night for bonfires, torch-lit processions and the high revelry of witches, preferably in high places. It is prime time for the Great Rite, a night (like Samhain) when the Goddess descends into women. Cailleach Beara (Cally Berry, Brighid’s crone aspect) turns to stone this night and does not to return until Samhain. Beltane Eve also marks the setting of the Pleiades

With my thanks to Lady Abyss for this information first posted May 2016.

I feel t is important to remember Lady Abyss as we count down the days until Beltane so I decided to repost an article by her from 2017.

Beltane is a time of great fertility — for the earth itself, for animals, and of course for people as well. This season has been celebrated by cultures going back thousands of years, in a variety of ways, but nearly all shared the fertility aspect. Typically, this is a Sabbat to celebrate gods of the hunt or of the forest, and goddesses of passion and motherhood, as well as agricultural deities. Here are a list of gods and goddesses that can be honored as part of your tradition’s Beltane rituals.

Artemis (Greek): The moon goddess Artemis was associated with the hunt and was seen as a goddess of forests and hillsides. This pastoral connection made her a part of spring celebrations in later periods.

Bes (Egyptian): Worshiped in later dynasties, Bes was a household protection god, and watched over mothers and young children. He and his wife, Beset, were paired up in rituals to cure problems with infertility.

Bacchus (Roman): Considered the equivalent of Greek god Dionysus, Bacchus was the party god — grapes, wine, and general debauchery were his domain. In March each year, Roman women could attend secret ceremonies called the bacchanalia, and he is associated with sexual free-for-alls and fertility.

Cernunnos (Celtic): Cernunnos is a horned god found in Celtic mythology. He is connected with male animals, particularly the stag in rut, and this has led him to be associated with fertility and vegetation. Depictions of Cernunnos are found in many parts of the British Isles and western Europe. He is often portrayed with a beard and wild, shaggy hair — he is, after all, the lord of the forest.

Flora (Roman): This goddess of spring and flowers had her own festival, Floralia, which was celebrated every year between April 28 to May 3. Romans dressed in bright robes and floral wreaths, and attended theater performances and outdoor shows. Offerings of milk and honey were made to the goddess.

Hera (Greek): This goddess of marriage was the equivalent of the Roman Juno, and took it upon herself to bestow good tidings to new brides. A maiden about to marry could make offerings to Hera, in the hopes that she would bless the marriage with fertility. In her earliest forms, she appears to have been a nature goddess, who presides over wildlife and nurses the young animals which she holds in her arms.

Kokopelli (Hopi): This flute-playing, dancing spring god carries unborn children upon his own back, and then passes them out to fertile women. In the Hopi culture, he is part of rites that relate to marriage and childbearing, as well as the reproductive abilities of animals. Often portrayed with rams and stags, symbolic of his fertility, Kokopelli occasionally is seen with his consort, Kokopelmana.

Pan (Greek): This agricultural god watched over shepherds and their flocks. He was a rustic sort of god, spending lots of time roaming the woods and pastures, hunting and playing music on his flute. Pan is typically portrayed as having the hindquarters and horns of a goat, similar to a faun. Because of his connection to fields and the forest, he is often honored as a spring fertility god.

Priapus (Greek): This fairly minor rural god has one giant claim to fame — his permanently erect and enormous phallus. The son of Aphrodite by Dionysus (or possibly Zeus, depending on the source), Priapus was mostly worshiped in homes rather than in an organized cult. Despite his constant lust, most stories portray him as sexually frustrated, or even impotent. However, in agricultural areas he was still regarded as a god of fertility, and at one point he was considered a protective god, who threatened sexual violence against anyone — male or female — who transgressed the boundaries he guarded.

Sheela-na-Gig (Celtic): Although the Sheela-na-Gig is technically the name applied to the carvings of women with exaggerated vulvae that have been found in Ireland and England, there’s a theory that the carvings are representative of a lost pre-Christian goddess. Typically, the Sheela-na-Gig adorns buildings in areas of Ireland that were part of the Anglo-Norman conquests in the 12th century. She is shown as a homely woman with a giant yoni, which is spread wide to accept the seed of the male. Folkloric evidence indicates that the figures are theory that the figures were part of a fertility rite, similar to “birthing stones”, which were used to bring on conception.

Xochiquetzal (Aztec): This fertility goddess was associated with spring, and represented not only flowers but the fruits of life and abundance. She was also the patron goddess of prostitutes and craftsmen.

by Patti Wigington
Published on ThoughtCo

Celtic festival of Beltane heats up in Scotland c. 2018

Beltane is he holiday that draws all witches outside to celebrate the returning power of the Sun and the fertility of the land.

Wear red robes for ritual and dress your altar with reds for passion. If you have identified a nearby rowan tree, you can make a wreath for your hair using rowan twigs. Decorate your house with freshly cut greens, herbs, and flowers. Arrange for music or drumming to lighten your steps of the dancers of the maypole or spiral dance. Lose yourself in the dance.

Fire is the honored element at this ritual, so have circle members jump a cauldron for purification and protection. Watr is another honored element: be certain to visit your local sacred spring or riverbank. Sprinkle perfume into the water for the undines. Again, leave a drop or two of milk and other food offerings for the nature spirits.

Wake before dawn on this day and watch the Sun rise over a river or beach. Gather a pitcherful where the Sun has gilded the water. When you return home, walk the bounds of your land, sprinkling water in your garden beds to ensure plenty of rainfall during the growing season.

To read more about celebrating Samhain please click on this link 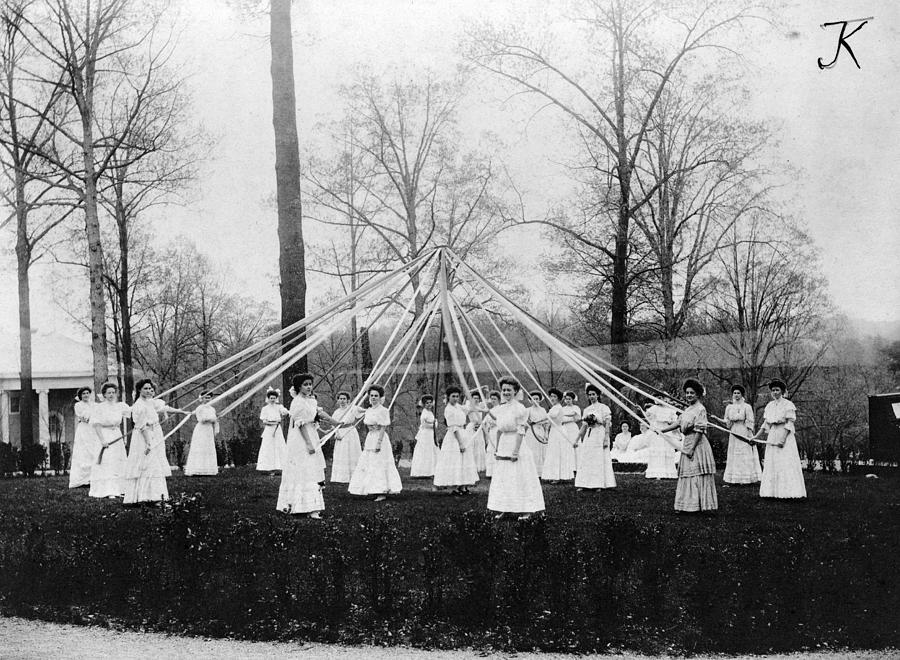 Welcome to springtime in the southern hemisphere. As the warmer weather comes a witches thoughts turns to sowing a garden. A garden can mean a different thing to each of us. For me it is getting my physical seeds ready for my veggie garden, to check to see if my herbs survived the winter or if I need to start new ones. Spiritually it means starting new seeds/paths for me to be able to grow to be closer to Mother Earth, the Universal energies, my students, and my teachers. To be able in the fall to reap full benefits of all that I have learned and put them into practice whether it is in my own personal life or helping my students with something. This year I need to plant new seeds and seedlings for all my flower gardens because early heavy rains in this part of the country washed away two inches of top soil in all my flower beds.

What does planting a garden mean to you? Do you plant flowers, vegetables, herbs, goals or a little of all of these or any combination? Remember whatever you plant will come to fruition with the right amount of love, watering (spiritually this can be communicating with each other in the pagan community or even be emailing me to say hi), sunshine (remember to thank the Sun God) and nurturing from within yourself (positive thoughts and affirmations) and from others in our community.

I would really LOVE to SEE COMMENTS on this post, please. Share with us your seeds and lets us help you grow them to their fullest potential!

History of Beltane from beltanefire.com.au

The Beltane fire festival welcomes the abundance of the fertile earth and is celebrated with bonfires, Maypoles, burning of the Wickerman, dancing, and a feast, with its roots in European traditions, Beltane is observed by many of today’s Pagans and others as a time for performing rituals

The Celts divided the year into two main seasons. Winter, the beginning of the year fell on November 1 (Irish: Samain) and midyear and summer on May 1 (Irish: Beltaine), opposite for us here in the Southern Hemisphere.

These two junctures were thought to be critical periods when the bonds between the human and supernatural worlds were temporarily erased; on May Eve (southern hemisphere)…

Today, in the Pagan calendar, the north celebrate the coming of winter at Samhainn. And all the while the sun is peaking up from behind the lush vernal trees and dancing for us once more in the southern hemisphere, as we welcome Beltane on October 31st. Or as I like to refer to it Beltane of the underworld.

A pagan spiral formation in Faerie Glenn where everything is miniature and enchanted. Copyright Content Catnip 2010

Beltane is  the Gaelic seasonal festival historically held to mark the midpoint between the spring equinox & summer solstice (Là Bealltainn in Scottish Gaelic; Lá Bealtaine in Irish). Fire is the traditional means of marking this spring festival of optimism & return.