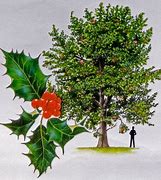 Although the Oak ruled in the previous month, its counterpart, the Holly, takes over in July. This evergreen plant reminds us all year long about the immortality of nature. The Holly moon was called Tinne, pronounced chihnn-uh, by the Celts, who knew the potent Holly was a symbol of masculine energy and firmness. The ancients used the wood of the Holly in the construction of weapons, but also in protective magic. Hang a sprig of Holly in your house to ensure good luck and safety to your family. Wear as a charm, or make Holly Water by soaking leaves overnight in spring water under a full moon — then use the water as a blessing to sprinkle on people or around the house for protection and cleansing. 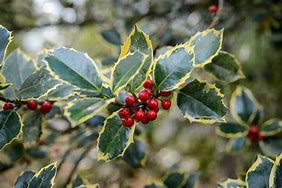 While the oak was the controller of the light half of the year, the holly controlled the dark, winter months.

It shares another quality with the oak in that it is resistant to lightning, its spikey leaves acting as mini conductors.

It was thus, also associated with the same Celtic and Norse gods of thunder, Taranis and Thor, and was often planted near dwellings to protect folk from lightning strikes.

It was thought that bringing the leaves inside during the winter months would provide shelter from the cold for the fairy folk, who in return would be kind to those who inhabited the dwelling.

When new Celtic Chieftains were chosen, a wreath of holly was often used as a crown for good luck and new-born babies were bathed in the water from the leaves to protect them from harm.

Although taking cuttings was encouraged in this way, due to its protective qualities, it was considered unlucky to cut down a whole tree.

Today holly is perhaps most associated with Christmas, when, following the old traditions, it adorns the houses as part of yule-tide decoration and festivities.

However, according to Christian beliefs, holly formed part of the crown of thorns worn at the crucifixion.

It was the blood of Christ that stained the holly berries red and it was the Christians who gave the holly tree its name from the word holy.

Holly berries are poisonous to humans but a good winter food source for birds. The leaves of the holly tree were used to treat colds and fevers largely associated with the winter months.

As a flower remedy holly is said to rid people of jealousy and hatred and open the heart to love.