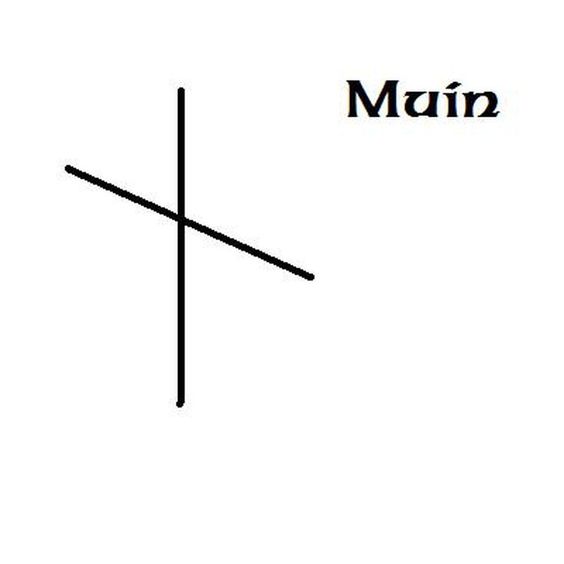 Muin (MUHN, like “foot”), blackberry* In Ireland Muin refers to the Bramble or Blackberry shrub, which grows wild along every hedgerow in Ireland it has a prickly spreading vine system and fruits in September a rich fruity wine can be made from the fruits.

The Vine is considered one of the Chieftain trees of the Ogham. Its attributes involve Inner
development. Vine is considered a tree of reincarnation and eternal life due to the spiraling
pattern of its growth. The Blackberry vine is often used in healing and money spells. 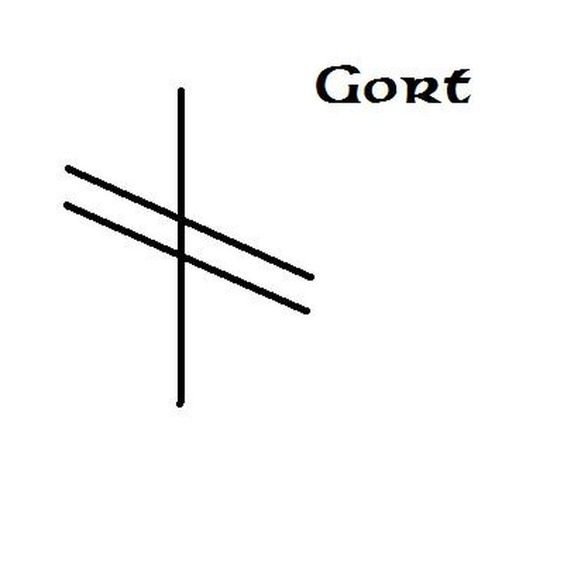 Gort (GORT), ivy – Ivy is also a vine, growing to 100 feet long in beech woods and around
human habitations, where it is widely planted as a ground cover. Ivy produces greenish
flowers before Samhain on short, vertical shrubby branches.

The leaves of these flowering branches lack the characteristic lobes of the leaves of the rest
of the plant. Like holly, ivy is evergreen, its dark green leaves striking in the bare forests of
midwinter. Ivy is widely cultivated in North America.

It is a member of the Ginseng family (Araliaceae).

The Greek God of Wine, “Bacchus”, wore a crown of ivy.

Ivy is the plant badge of the Gordons who originated in the lowlands of Scotland. The Greeks and Druid priests gave newlyweds wreaths of ivy to confer a blessing of strength and eternal love. Bards were presented Ivy crowns for their festivals (Eistedfods).

Ivy invokes protection when planted on or near a house. Ivy is equated with fidelity and is
woven into marriage wreaths. It is also used in charms to bind luck, love, and fidelity to your person. 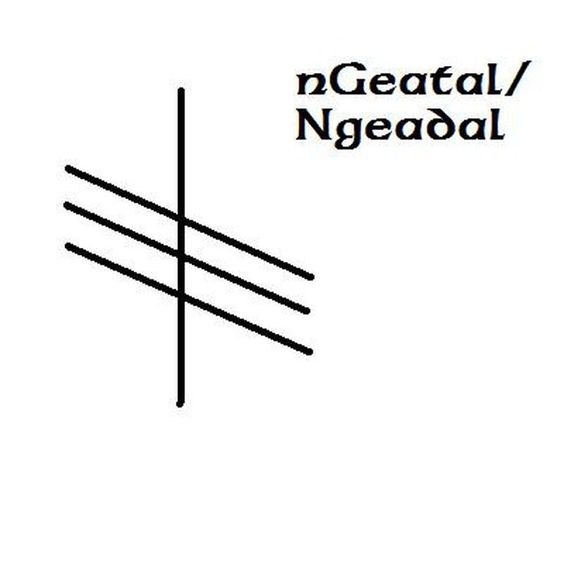 Ngetal (NYEH-tl), reed – The term “reed” is used with great imprecision in North America,
but it is clear that the reed of the Ogham is the common reed (Phragmites australis). This is a giant grass, with stems as high as 12 feet. It grows in marshy areas, where it often forms dense stands.

The vertical stems live only a single year, dying in the autumn and being replaced with new
green shoots in the spring. The dead stems rattle and whisper in late autumn winds.

In North America it is widespread in cooler climates. Common reed is in the Grass family
(Poaceae, or Gramineae).

Reed indicates direct action, and finding direction and meanings for the purpose of your
journey. The Reed is symbolic of music, bagpipes and flutes.

A broken reed is the symbol of all that is untrustworthy, for it shows something that is
rigid and inflexible. Reed is associated with the salmon of wisdom and most waterfowl.
Cut Reeds were used as pens and symbolized wisdom and scholarship. 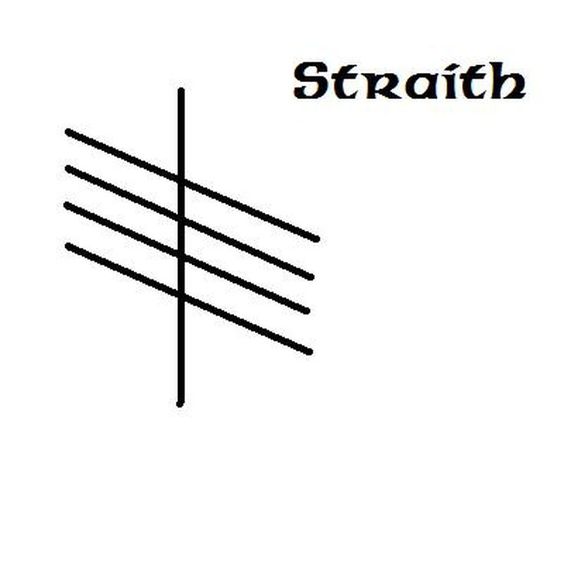 Straif (STRAHF), blackthorn – The blackthorn is a relative of cherries and plums, and is the source of the sloe fruit. The fruit has been used for centuries to make a potent alcohol that was drunk during Pagan rituals in Eastern Europe, and in British Isles.

It is a thorny shrub growing to 12 feet, often forming thickets on south-facing slopes. The
blue-black fruits are edible, but bitter until after the first frost. Blackthorns are seldom
cultivated in North America. They are members of the Rose family (Rosaceae).

Blackthorn is depicted in many fairy tales throughout Europe as a tree of ill omen. A long hard winter is referred to as a Blackthorn Winter.

It is a sacred tree to the Dark, or Crone aspect of the Triple Goddess, and represents the Waning and Dark Moons. Blackthorn is known as “the increaser and keeper of dark secrets”.

The tree is linked with warfare, wounding and death, associated with the Scottish Cailleach
– the Crone of Death, and the Irish Morrigan. In Scotland, winter begins when the Cailleach (also the Goddess of winter) strikes the ground with Her Blackthorn staff.

A black rod is a Blackthorn wand with fixed thorns on the end, used to cause harm to others. In British folklore, a witch will use a Blackthorn stang in rituals of cursing. The sharp thorns were reputedly used by English witches to pierce poppets in their curses, called the “pins of slumber”.

In South Devon folklore in England, witches and heretics were burned on Blackthorn pyres. The Devil was said, in medieval times, to prick his follower’s fingers with the thorn of a Blackthorn tree.

The Irish cudgel is called a “bata”, or more popularly, a shillelagh. The shillelagh is usually made from Blackthorn.

In England Witches would carve the Norse rune “Thorn” on a Blackthorn stave for protection.

Blackthorn often topped the Maypole entwined with Hawthorn, and is called “Mother of the Woods”. 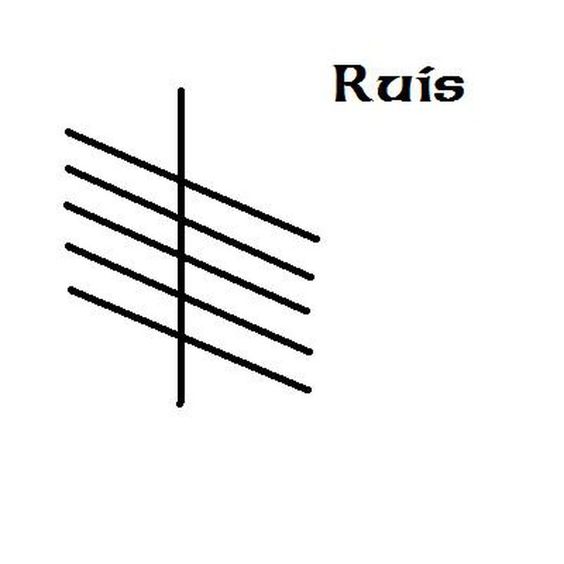 Ruis (RWEESH), elder: The common elder is a shrub growing to 30 feet in damp clearings,
along the edge of woods, and especially near habitations. Elders are grown for their blackish berries, which are used for preserves and wine. The leaf scars have the shape of a crescent moon. Elder branches have broad spongy pith in their centers, much like the marrow of long bones, and an elder branch stripped of its bark is very bone-like. Common elders are seldom seen in cultivation. Elders are in the Honeysuckle family (Caprifoliaceae).

Elder is sacred to the Celtic White Lady and the Summer Solstice. The Elder is a tree of Venus and is associated with the element of Air.

Early European legends tell of a dryad called Hylde-moer, The Elder Tree Mother, who lives in the Elder tree and watches over it. Should the tree be chopped down and furniture made of the wood, Hylde-moer would follow her property and haunt the owners.

Elder as a Vampire protection is older folklore than the lore about garlic.

It is said in Irish folklore that it is Elder which is used by witches for their magic “hobby
horses” and besoms.

The Elder is also seen in a negative light by the Christian religion, since Judas allegedly hanged himself from an Elder tree and the cross used to crucify Jesus was supposed to be made of Elder.

According to the Rede; Elder is the Lady’s Tree, burn it not or cursed ye be!

One thought on “Introduction to Ogham – Third Aicme”