Your Daily Tarot Card for Dec. 11 is The Pope 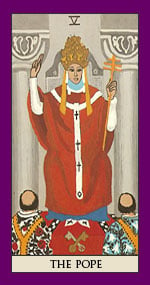 As a priest, the Pope, or Hierophant, represents traditional values and moral development. He is the wise teacher or counselor guiding groups or collectives on their path in search for spiritual truth or meaning. Depicted as a religious figure in ceremonial vestments he interprets secret mysteries, divine law, and theological doctrine. Although this card implies that he is linked to the church, the Pope signifies not only organized religion but also focus on groups in general, such as schools, teams, companies – any group with fixed roles and assigned responsibilities. The Pope is a symbol for rules, procedures, structure, and ritual, creating harmony within groups and staying their course so they can find identity and progress as a whole. The negative imagery symbolizes dogmatism and inflexibility, extreme conformity, or conventionalism.

Your Daily Tarot Card for December 12 is The Hermit 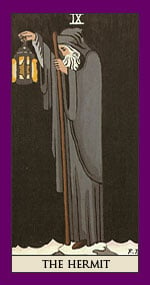 The Hermit card symbolizes meditation, reflection, and solitude. As one of the cards resembling old age it also represents bearing the light of wisdom, looking into the unconscious, observing dreams. There is an emphasis on peace and patience, by which maturity is reached, and a striving to connect to the higher spiritual self. The Hermit also depicts the spiritual leader, the taskmaster who leads with purpose, conscience, and wisdom. A mature person, the Hermit symbolizes deliberation about which path to follow, reassessment of achievements and goals, and taking the time to reflect and plan. In a negative environment this card can resemble excessive isolation, lack of communication, intolerance, crisis and doubt.