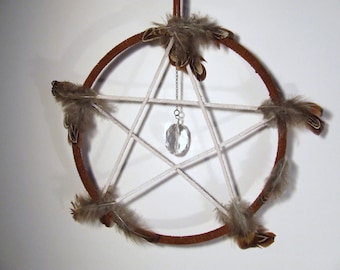 A pentacle dream catcher is not difficult to make. It requires a circular ring; even a large curtain ring will do. You will also need some thread, string, or heavy crocheting thread to weave the design upon this ring. If you really want to be decorative, you can string tiny beads on the thread and attach little feathers where the string is wound around the ring.

If you carefully check the angle of the thread each time you prepare to wind it at another point on the ring, you can adjust the design. Make a small loop for hanging at the top of the pentacle.

If you want to string beads on the thread, do it on each section before you wind the thread around the ring. I’ve seen one pentacle dream catcher decorated with a Samhain artificial cobweb and a tiny spider in the center.

Dream catchers do work. They are symbols of personal control over dreams. And the subconscious mind which creates dreams only understands symbols.

Bavenite is named after the type locality of Baveno, Piedmont, Italy.

Workings: Bavenite is used to provide incentive to grow spiritually, emotionally, and intellectually. It is used to enhance one’s self image. Bavenite is associated with the astrological sign of Libra and vibrates to the Master numbr 33.

Chakra Applications: Bavenite is associated with the Throat chakra.

Foot Notes: Bavenite is a rare silicate that forms radial crystals in shades of white. It is found in beryllium-rich granite pegmatites.

Greek physician Dioscorides would apply Lemon Balm to scorpion or animal bites for its antibacterial properties, and then give the patient wine infused with Lemon Balm to calm their nerves.


Medicinal Uses: Lemon balm is a member of the mint family. It is used to reduce stress and anxiety, promote sleep, improve appetite, and ease pain and discomfort associated with digestion. Combines well with valerian for a soothing, relaxing effect. For cold sores or herpes sores, steep 2 to 4 tsp of crushed leaf in 1 cup boiling water for 10 to 15 minutes. Cool. Apply tea with cotton balls to the sores throughout the day. An infusion of the leaves added to bath water is also said to promote the onset of menstruation.

Lemon Balm should not be used by pregnant or breastfeeding women. Lemon balm may interfere with sedatives and thyroid medications.

Magickal uses: Used in spells to ensure success.  It is used in spells associated with healing, health, friendship, love, and success.  Historically, it is a symbolic plant used to transmit messages between lovers.

Carry Lemon Balm in a charm or sachet to find love, or burn it as an incense when doing spells related to success.

Growth: Lemon balm is native to Europe but is now grown all over the world. In the spring and summer, clusters of small, light yellow flowers grow where the leaves meet the stem. The leaves are very deeply wrinkled and range from dark green to yellowish green in color, depending on the soil and climate.

Bellona was an Ancient Roman goddess of war. She was called the sister of Mars, and in some sources, his wife or an associate of his female cult partner Nerio. Bellona’s main attribute is the military helmet worn on her head, and she often holds a sword, a shield, or other weapons of battle.

Politically, all Roman Senate meetings relating to foreign war were conducted in the Templum Bellonæ (Temple of Bellona) on the Collis Capitolinus outside the pomerium, near the Temple of Apollo Sosianus. The fetiales, a group of priest advisors, conducted ceremonies to proclaim war and peace, and announce foreign treaties at the columna bellica, in front of her temple.

In art, she is portrayed with a helmet on her head, usually wearing a breastplate or plate armour, bearing a sword, spear, shield, or other weaponry, sometimes holding a flaming torch or sounding the Horn of Victory and Defeat. In heraldic crests, she may be shown as a goddess with spread feathered wings bearing a helmet or coronet.

Ammianus Marcellinus, in describing the Roman defeat at the Battle of Adrianople refers to “Bellona, blowing her mournful trumpet, was raging more fiercely than usual, to inflict disaster on the Romans”.

Near the beginning of Shakespeare’s Macbeth (I.ii.54), Macbeth is introduced as a violent and brave warrior when the Thane of Ross calls him “Bellona’s bridegroom” (i.e. Mars). In Henry IV, Part I, Hotspur describes her as “the fire-eyed maid of smoky war” (IV.i.119). And in The Two Noble Kinsmen (1613), set in pre-Roman Athens, the sister of Hippolyta will solicit her divine aid for Theseus against Thebes (I.iii.13).

The goddess has also proved popular in post-Renaissance art as a female embodiment of military virtue, and an excellent opportunity to portray the feminine form in armour and helmet.

The composer Francesco Bianchi and the librettist Lorenzo da Ponte together created a Cantata first performed in London on 11 March 1797 & called Le nozze del Tamigi e Bellona, (The Wedding of the Thames and Bellona), to mark the British naval victory over the Spanish at the Battle of Cape St Vincent.

Also, the “Temple of Bellona” was a popular choice of name for the small mock-temples that were a popular feature of 18th- and 19th-century English landscaped gardens (e.g. William Chambers’s 1760 Temple of Bellona for Kew Gardens, a small Doric temple with a four-column facade to contain plaques honouring those who served in the Seven Years’ War of 1756–64).

First World War poet Edgell Rickwood wrote a poem “The Traveller” where he marches toward the front line in company of Art, the God Pan and the works of essayist Walter Pater. As they approach the active war, they meet Bellona. One by one the pleasurable companions are forced to flee by the violence of war, until Bellona rejoices in having him to herself.

Samuel R. Delany’s 1975 novel Dhalgren is set in the city of Bellona.

The detective novel The Unpleasantness at the Bellona Club by Dorothy L Sayers is set at a fictional London club whose membership is composed of active or retired military officers, and is named after the goddess. A man kills a deer and takes it home to cook for dinner. Both he and his wife decide that they won’t tell the kids what kind of meat it is, but will give them a clue and let them guess. The dad said, “Well it’s what Mommy calls me sometimes.” The little girl screamed to her brother, “Don’t eat it. Its an asshole!

Explanation: Despite appearances, the sky is not falling. Two weeks ago, however, tiny bits of comet dust were. Featured here is the Perseids meteor shower as captured over Mt. Rainier, Washington, USA. The image was created from a two-hour time lapse video, snaring over 20 meteors, including one that brightened dramatically on the image left. Although each meteor train typically lasts less than a second, the camera was able to capture their color progressions as they disintegrated in the Earth’s atmosphere. Here an initial green tint may be indicative of small amounts of glowing magnesium atoms that were knocked off the meteor by atoms in the Earth’s atmosphere. To cap things off, the central band of our Milky Way Galaxy was simultaneously photographed rising straight up behind the snow-covered peak of Mt. Rainier. Another good meteor shower is expected in mid-November when debris from a different comet intersects Earth as the Leonids.

Maybe you noticed. Things have gotten more serious with the Moon in Capricorn. No-nonsense suits around the office. Discussions about rules, disciplines, hard work and respect. Virtues that make employees squirm and bosses feel lonely. Structure-everybody hates it until something unruly occurs. Physics says a vast and wild emptiness dances between the molecules in a chair. But we don’t fall in due to the structuring thought in wood, respecting our need for a solid place to sit. That’s Capricorn in your life, structures that support. Its energy inspires your achievements and fears (funny how both can be motivating). Face a fear today. Be the authority in something. Devise a business plan. Recognize that diligence is nothing more than keeping what you want in mind. Strategize with a wise old one. And do something especially nice this Moontime for your skin, bones or knees.

Holding on to anger is like grasping a hot coal with the intent of throwing it at someone else; you are the one who gets burned.

The Moon
This card represents serendipity, creativity and the coming to life of psychic powers. It may also signify dangers yet seen, deception and bad luck for someone dear to you.

The Food Charm
You must take steps to protect your body from what you ingest. This aspect is affected by a poor diet. You have a bad habit of filling your body with things you know are not good for you.

In Chinese Culture the Dragon is generally considered a sign of great luck and power. However the Red, Green and White Dragons in Mahjong represent three distinct influences that can affect your life. The Dragon Reading creates a relationship between sets of tiles to each Dragon to explore how the Three Dragons will influence you now and in the near future.

The White Dragon is indeed a wily fellow. His domain is the great unknown, and the tile set under him suggests an area or areas that could affect your life in unexpected ways.

Bamboo 6
Symbol: Water
The Water tile denotes a need for communication. A trip may be necessary to communicate properly. You may be called upon to present proof of ownership or that an event actually took place.

Bamboo 3
Symbol: Toad
The Toad tile indicates some troubling moments along your life’s path, but these aches will heal. It also suggests your ambition may be greater than your reach.

Red Dragon
Symbol: Center
The Red Dragon tile is indicative of success and the fulfillment of your goals.