The most familiar Ogham system in use today is the Tree Ogham. The Tree Ogham is split up into; eight Chieftain Trees, eight peasant trees and eight shrub trees. In lessons two through five we will take a look at each group of five and their associations. We can develop a deeper understanding of each letter by understanding its connections with each tree. 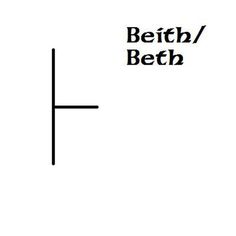 Beth (BEH), birch – The silver birch is the most common birch in much of Europe. It is one of the first trees to colonize an area after a mature forest is harvested; this is probably a large part of its symbolic connection with new beginnings. It grows up to 100 feet high, but is more often found in spreading clumps on sandy soils. The common birch (B. pubescens Ehrh.) is almost as widespread as the silver birch, but grows primarily on acid or peaty soils; it can reach 65 feet in height.

The word “birch” derives from a root meaning ‘bright’ or ‘shining’ Because of its connection to renewal; the birch has been utilized in many cultures. In Scandinavia, switches of birch are used on the body to stimulate the process of purification in the sauna.

In ancient Britain the birch rod was used as a rod to purify the criminal of their misdeeds,
and in some cases it was used to expel evil spirits from those deemed insane.

In many cultures, including the Shamanic beliefs, the birch is seen as the “Axis Mundi”, (Cosmic World Tree). Often, baby cradles were made out of birch because of its power to drive out evil influences and its association with renewal. 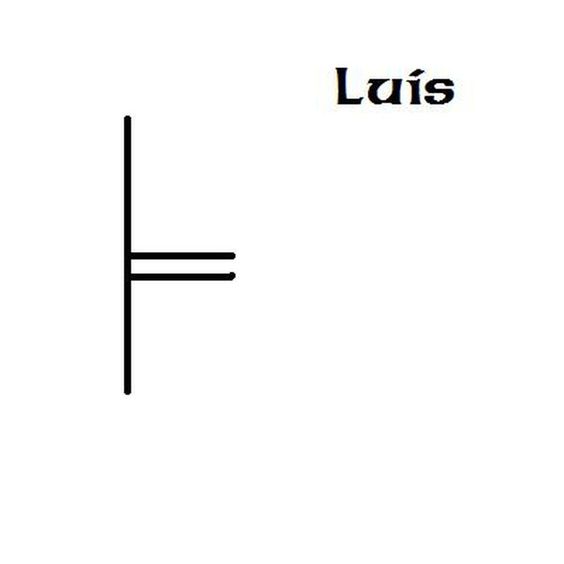 Luis (LWEESH), rowan – the rowan, or mountain ash is related to serviceberries. The red berries were historically used to lure birds into traps, and the specific epithet “aucupari’a” comes from words meaning “to catch a bird”. Rowans thrive in poor soils and colonize
disturbed areas. In some parts of Europe they are most common around ancient settlements, either because of their weedy nature or because they were introduced by humans. Rowans flower in May. They grow to 50 feet and are members of the Rose family (Rosaceae). They are cultivated in North America, especially in the northeast.

The rowan is sometimes called “the Whispering Tree” because it is thought that the tree held secrets. The rowan is also associated with protection against witchcraft and bad luck.Rowan twigs were placed above doorways and barns to protect the inhabitants against misfortune and evil spirits.

Rowan stakes were driven into corpses to stop their ghosts from visiting, especially when they died from acts of violence. The Druids used rowan fires with incantations to summon spirits to help them portend in forthcoming battles.

Scottish tradition does not allow the use of the Rowan tree’s timber, bark, leaves or flowers, nor the cutting of these trees, except for sacred purposes under extenuating circumstances.

Rowan is also called the Witch Tree, or Wicken Tree, and can be used for divining precious
metals.

Fearn (FAIR-n), alder – The common alder is often found along lowland rivers, where it grows with aspens and willows. Like willows, alders sprout from stumps–this allows them to regenerate after heavy flooding. In protected sites they may grow to 65 feet tall. Their leaves are more blunt-tipped than most North American alders, which look more like the grey alder (A. incana (L.) Moench). Like ashes, European alders are not widely cultivated in North American (they are often sold as black alders), but several native species are.

Alders are members of the Birch family (Betulaceae).

The old superstition of “whistling up the wind” comes from making a whistle out of Alder.

Alder figures into a couple of ancient mythologies. Scandinavian mythology tells us the first
woman was fashioned from an Alder trunk. In Irish mythology the first man was said to be
made from an Alder.

The Alder is known as the “King of the Fairies”. In Homer’s Odyssey Alder is named the first of the three trees of resurrection. The two other are White Poplar and Cypress. In Denmark and Germany, the spirit of the Alder tree was said to carry children off to the Otherworld. An example of this belief can be found in Goethe’s ballad “The Erl-konig” (The Alder King). 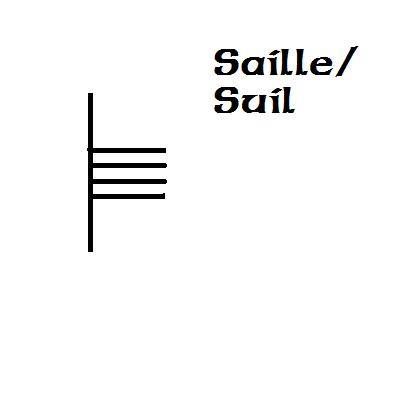 Saille (SAHL-yuh), willow – Like North America, Europe is home to a large number of willow species Two common tree willows are the white willow (Salix alba) named for the whitish undersides of its leaves, and the crack willow (Salix fragilis) for the propensity of its
branches to “crack” off (probably another adaptation to flooding).

Both species grow along with poplars and alders along lowland rivers. They can reach 80 feet in height, and they both vigorously sprout from stumps. The white willow is sometimes grown in cultivation in North America. Willows are members of the Willow family (Salicaceae).

The Willow is often the symbol for the Ovate Grade of Druid. According to Druidic mysteries, two scarlet snake eggs were hidden within the Willow. The Universe was hatched from these two eggs, one containing the Sun, the other the Earth, relating to both cosmic birth and the birth of mankind. Traditionally, in spring rituals, these were replaced by hen’s eggs, colored scarlet for the Sun and eaten at Beltane. This rite later became the Christian celebration of Easter.

In Sumer, 4000 BCE, Ishtar’s predecessor, Belili, was known as the Willow Mother. Orpheus, the poet, was said to have received his Gift by touching the Willows in a grove sacred to Persephone.

Brighid has Her Fire festival, Imbolc, or Brigantia, during the Willow month.

The Willow tree has been associated with death, grief and cemeteries, the leaves themselves
symbolizing unrequited love or the loss of a lover. The leaf has also been worn as a charm
to protect against jealousy.

Willow has been used in the Sacred Pipes and the tobacco blends of many Native Americans because it is thought that it is most effective in carrying messages to the Great Spirit. 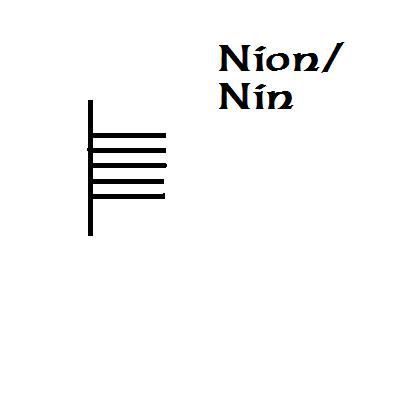 Nion (NEE-uhn), Ash is a major tree of lowland forests in much of Europe, along with oaks and beeches. It grows to 130 feet in open sites, with a broad crown reminiscent of American elm trees. Ash was and still is an important timber tree, and is a traditional material for the handle of a besom; it is also a popular wood for wands. The common ash is occasionally cultivated in North America, and similar native ash species are widely grown as street
trees.

Ashes are members of the Olive family (Oleaceae). The wood of the Ash is thought to be enchanted and was used by the Druids to fashion wands and spears.

At one time, children would be passed through the branches of an Ash in order that they
might be protected and to cure them from illness. Ash leaves were placed under pillows to
induce prophetic dreams or placed in bowls of water to ward off ailments.

The Celts believed that the Ash originated in the Great Deep or the Undersea Land of Tethys. It belongs to the trilogy of sacred Irish trees (the other two being the Oak and Hawthorn) and is said to offer particular protection from death by drowning.

The seeds of the Ash have long been used in love divination. If the seeds did not appear on
a certain tree, then its owner was thought to have been unlucky in love or a future venture
would be unsuccessful.

In Northern England, it was believed that if a woman placed an Ash leaf in her left shoe, then she would be fortunate enough to immediately meet her future spouse. In Greece, the Ash was sacred to the Sea God Poseidon.

In Norse mythology, the Ash is known as “Yggdrasil” (Cosmic World Tree). It was from this tree that Odin hung upside down from for nine days in order to obtain the runes. Also in Norse legend, it was an Ash which spanned the universe, with its roots in Hel and its boughs supporting the Heavens and Earth at its center.

In Celtic lore, the Ash connected the three circles of existence; Abred, Gwynedd and Ceugant.

One thought on “Introduction to Ogham – First Aicme”