WOTC’s Spell of the Day for April 13

A Spell for Freedom from Enchantment

Have you ever had a person come into your life who just simply took your breath away. You hung on every word they said, your eyes couldn’t leave their eyes, you were simply mesmerized by them. You are in love, you have find the right person, the world is a merry-go-round, things couldn’t be any better or could they? Perhaps it is love (who am I to say) or perhaps it is Witchcraft at work. Perhaps you have been in enchanted, If you are starting to have your doubts, we have the perfect spell for you. You know if you are having your doubts now, it can’t hurt to try it, it could just clear things up for you. 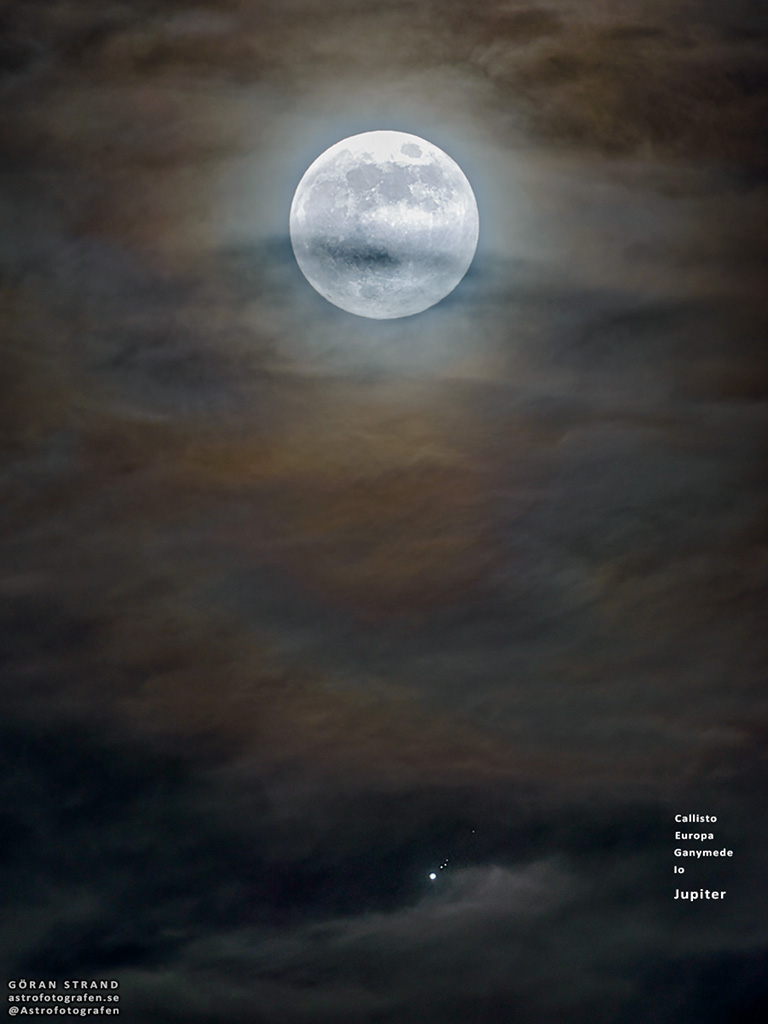 Explanation: On April 10, a Full Moon and Jupiter shared this telephoto field of view. Both were near opposition, opposite the Sun in Earth’s night sky. Captured when a passing cloud bank dimmed the bright moonlight, the single exposure reveals the familiar face of our fair planet’s own large natural satellite, along with a line up of the ruling gas giant’s four Galilean moons. Labeled top to bottom, the tiny pinpricks of light above bright Jupiter are Callisto, Europa, Ganymede, and Io. Closer and brighter, our own natural satellite appears to loom large. But Callisto, Ganymede, and Io are physically larger than Earth’s Moon, while water world Europa is only slightly smaller. In fact, of the Solar System’s six largest planetary satellites, only Saturn’s moon Titan is missing from the scene.

See a daytime moon around now

Tonight – April 13, 2017 – the moon is in a waning gibbous phase. That means it rises in the east later than it did last night. And it will rise later and later each evening, which means you can catch the daytime moon over your western horizon after sunrise the next few mornings. Sylvia asked:

When is the best time to see the moon in the sky during daylight hours?

And the answer is that the upcoming week is a good time to look. For example, view the moon in your eastern sky before going to bed this evening, April 13, and then look for the moon low in your western sky right after sunrise, April 14.

The daytime moon is up there much of the time, but, because it’s pale against the blue sky, it’s not as noticeable as the moon at night. The most noticeable moon at night is the one that stays out all night long, in other words, around the time of full moon each month. A full moon rises at sunset and sets at sunrise. The last full moon was April 11, 2017 at 6:08 UTC.

In the days following full moon – in other words, around now – the waning gibbous moon is rising later each night and setting in the west later each day after sunrise.

So, in the several mornings following full moon – after sunrise – look for the waning gibbous moon in the west during the morning hours. At mid-northern latitudes in North America, the moon will set about an hour (or more) after sunrise on April 14, 2017, and it’ll set roughly 45 minutes later after sunrise each day thereafter.

By the way, the moon is up during the day half the time. It has to be, since it orbits around the whole Earth once a month. The crescent moon is hard to see because it’s so near the sun in the sky. At the vicinity of last quarter moon about a week from now, you might have to crane your neck, looking up, to notice it after sunrise.

Ordinarily, we don’t look up to see the waning last quarter moon and waning crescent after sunrise.

That’s one reason why people so often miss the moon during the day.

Day by day, the lighted portion of the waning gibbous moon will shrink and the half-lit last quarter moon will come on April 19. Watch for the daytime moon to climb higher and higher into the western sky at sunrise all this coming week!

Bottom line: Starting around April 14, 2017 look for the daytime moon in the west after sunrise.

The whole secret of existence is to have no fear. Never fear what will become of you, depend on no one. Only the moment you reject all help are you freed.

Today’s Meaning:
Guests and visitors will come calling. Their visit brings happiness and joy. This aspect will reflect these emotions for weeks after the visit.

General Description:
Crescents were worn by the ancients to safeguard them against witchcraft and danger. From the very early Eastern symbols, horseshoes came to be regarded by the Greeks and Romans as charms against sickness and the plague. In the middle ages horseshoes were used as amulets for witchcraft and even today are looked upon as lucky. When the representation of the hand of strength was worn with the crescent it signified hospitality and generosity. Hands of Might are painted on houses in Italy, Syria, Turkey and in the East to protect the buildings from misfortune and the inmates from death. The blue beads were worn to avert the evil eyes. The Lotus represents the spiritual self in its purest form. It reminds us that for most achieving a well developed spirituality is a journey which can be long and arduous. The spirit of the Lotus is not of our secular world, and the presence of The Lotus suggests that what is needed can be found by exploring your relationship with the Universe not as a physical entity pursuing material gain, but as a divine soul in need of celestial sustenance.

As a daily card, The Lotus is indicative of a period in which your energies should be focused on your spiritual self. This doesn’t mean you should forsake your possessions or place in our secular world. It simply implies you might be well served by reaffirming or further developing your spiritual self at this time.

The Hierophant represents the protector of a culture’s heritage and traditions. His purpose is to defend and teach the established ways and beliefs a group embraces. He is inherently conventional and a true believer in the power of the group. He loves the structure of the group and its values. It is the task of The Hierophant to bring new members into the group—to prepare the uninitiated to take their rightful place in his culture. In this sense he is very much like a teacher or a priest. He also acts as the repository of his group’s history. The Hierophant is certainly not one to buck proper authority. However, he is staunch and worthy defender of the tried and true. He represents the positive aspects of tradition and conformity. I feel it is my fault that we haven’t discussed the Bindrunes, especially since I am a Rune Reader. I ran across this page and there are a few Bindrunes I use to make for family, friends, familiars and myself. The Bindrunes are a combination of different runes that are put together for the practitioner’s purpose. The one I used on several occasions was the one in the upper right-hand corner. I will not lie to you it does help if you have some knowledge of the Runes. I believe for Bindrunes it is best that the practitioner make his or her own. With the Bindrunes, you can create any spell you want and if it is a not so nice spell or in this case Rune, you can give it to your intended victim. But I would never dream of doing anything like that, lol!

When we get a routine again, I will show you all the different Bindrunes there are. I think you will be like I was, totally amazed. I believe after I saw all the things that Runes can do is the reason I gave up on Tarot cards. But when we get to that, I will let you be your own judge.

Now back to business, I just found something from the past that I wanted to share with you.