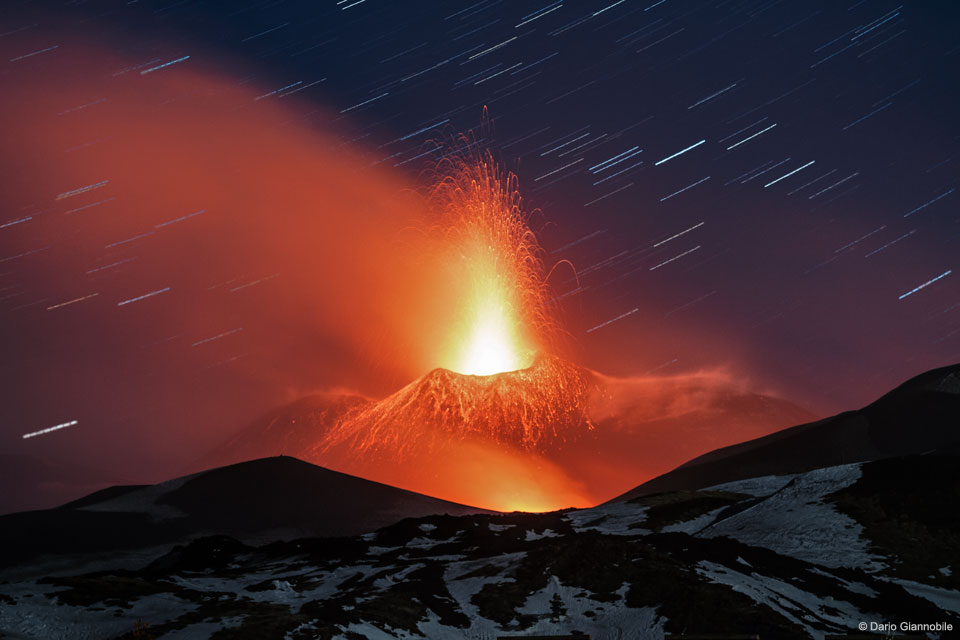 Explanation: Mt. Etna has been erupting for hundreds of thousands of years. Located in Sicily, Italy, the volcano produces lava fountains over one kilometer high. Mt. Etna is not only one of the most active volcanoes on Earth, it is one of the largest, measuring over 50 kilometers at its base and rising nearly 3 kilometers high. Pictured in mid-March, a spectacular lava plume erupts upwards, dangerous molten volcanic bombs fly off to the sides, while hot lava flows down the volcano’s exterior. The Earth’s rotation is discernable on this carefully time, moon-lit, long duration image as star trails.

By Bruce McClure in TONIGHT

Today – April 26, 2017 – presents the first of four supermoons in 2017. What, you say? Supermoon? But the moon isn’t anywhere near full on April 26! That’s right. This isn’t a full supermoon. Rather, it’s a new supermoon. In fact, the new moons on April 26, May 25 and June 24 all qualify as supermoons, with the May 25 new moon counting as the “most super” of the bunch. Follow the links below to learn more about the supermoons of 2017.

. . . a new or full moon which occurs with the moon at or near (within 90% of) its closest approach to Earth.

By this definition, a new moon or full moon has to come within 225,027 miles (362,146 km) of our planet, as measured from the centers of the moon and Earth, in order to be a supermoon.

That’s a very generous definition, and it’s why supermoons are common. According to Nolle’s definition, the year 2017 gives us a total of four supermoons: the new moons of April, May and June, and the full moon of December. After that, the following full moons on January 2 and 31, 2018, count as supermoons, too. Additionally, some will call the full moon on January 31, 2018 a Blue Moon.

Each month, on the day of the new moon, the Earth, moon and sun are aligned, with the moon in between. This line-up creates the wide-ranging spring tides. High spring tides climb up especially high, and on the same day low tides plunge especially low.

An extra-close new moon accentuates the spring tide all the more, giving rise to what’s called a perigean spring tide. If you live along an ocean coastline, watch for high tides caused by the April, May and June 2017 new moons – or supermoons.

Can I see the April 26 supermoon? Don’t expect to see the new moon on April 26. At the vicinity of new moon, the moon generally hides in the glare of the sun all day long, pretty much rising with the sun at sunrise and setting with the sun at sunset. On the other hand, if you were on the moon looking at Earth, you’d see a full Earth. However, you might be able to catch a young moon after sunset on April 27.

What is the closest supermoon of 2017? As we said above, the year 2017 will have four supermoons: the new moons of April, May and June, and the full moon of December.

Farthest full moon of 2017 on June 9. One fortnight (approximately two weeks) after the year’s nearest new moon on May 25, it’ll be the year’s farthest and smallest full moon on June 9, 2017. People are calling this sort of moon a micro-moon.

Bottom line: The first supermoon of 2017 comes when the moon turns new on April 26, 2017! No, you won’t see this moon, because the new moon hides in the glare of the sun, but you might discern the higher-than-usual tides along the ocean shorelines.

I hear and I forget. I see and I remember. I do and I understand.

Today’s Meaning:
This aspect needs to be lightened up a bit, things are getting to serious. Some humor or even a bit of flirting could lighten the tone greatly.

General Description:
The use of this, one of the most ancient charms, dates back to the commencement of our present civilization, and was in use previous to the Jewish dispensation. The symbol has been used in almost every religion, and was considered all powerful, efficient, and the perfect sign of the absolute. The triangle with the apex upwards symbolized all that was good and the inverted triangle all that was evil, and the two combined in the device portrays the triumph of good over evil. The seven discs represent the seven then known planets. This charm was worn to protect the wearer from every description of mischief and danger, and was a preserver from all evil.

Your Past, Present, Future Reading

The three Mahjong tiles in this reading represent your past, present and future situations.

Circles 3
Symbol: Phoenix
The Phoenix tile indicates great happiness and joy. The Phoenix is said to be reborn out its ashes. Accordingly the Phoenix tile also denotes sure recovery from any setbacks encountered.

Circles 6
Symbol: Peach
The Peach tile represents the female spirit in its purest form. Where the Peach tile appears it is likely a woman or possibly a young girl will play an important role in outcome of your reading.