Today’s Spell-of-the-Day for March 13 is an Ostara spell called “The Doorstop Spell.” The intent of this spell is to help you find balance in your physical life as well as your mental well-being.

One charcoal disk on a fireproof dish

Incense blended from equal parts of frankincense and myrrh

One black pillar candle (12 in. tall)

One white pillar candle (12 in. tall)

Two teaspoons of almond oil in a saucer

One egg cup of salt in a dish

Hate to run but life calls, we get to go to town today! Hey, it’s a big deal I tell you, lol! Before we go we are going to do a daily podcast which will contain an Ostara spell today. So give us a minute or two and then check it out,  The WOTC Podcast. Till tomorrow, my sweets….. 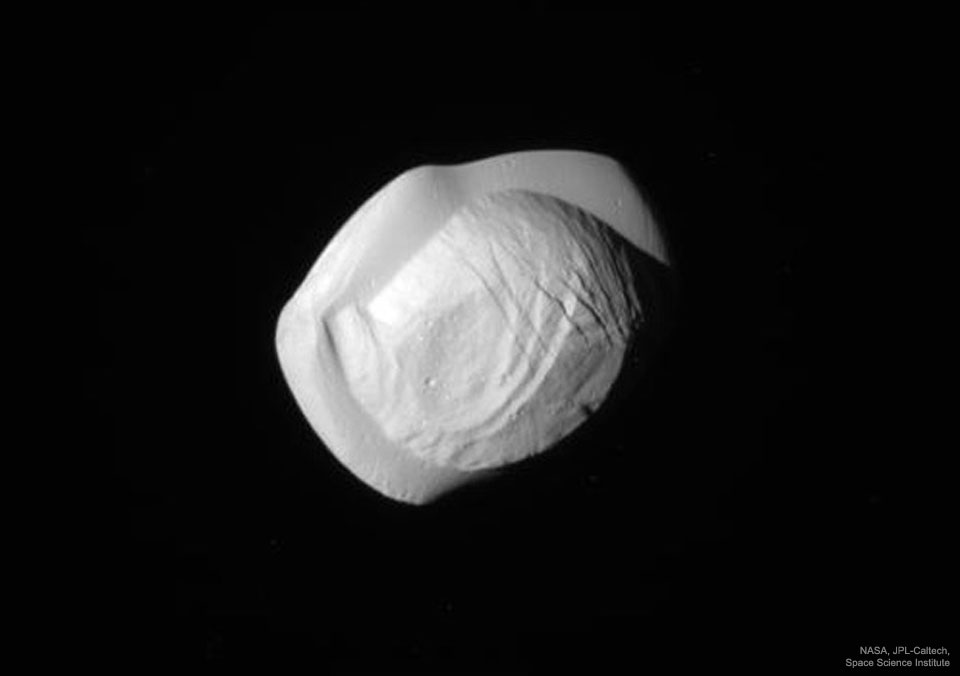 Explanation: Why does Saturn’s moon Pan look so odd? Images taken last week from the robotic Cassini spacecraft orbiting Saturn have resolved the moon in unprecedented detail. The surprising images reveal a moon that looks something like a walnut with a slab through its middle. Other visible features on Pan include rolling terrain, long ridges, and a few craters. Spanning 30-kilometer across, Pan orbits inside the 300-kilometer wide Encke Gap of Saturn’s expansive A-ring, a gap known since the late 1800s. Next month, Cassini will be directed to pass near Saturn’s massive moon Titan so it can be pulled into a final series of orbits that will take it, on occasion, completely inside Saturn’s rings and prepare it to dive into Saturn’s atmosphere.

Tonight – March 13, 2017 – and tomorrow night, look for the brilliant waning gibbous moon to pair up with the dazzling planet Jupiter and the nearby bright star Spica. Depending on where you live worldwide, the moon and Jupiter will rise over your eastern horizon an hour to a few hours after sunset. Click here for recommended sky almanacs; they can help you find the rising times of the moon and Jupiter (and the star Spica) into your sky.

Our chart at the top of this post shows the changing position of the moon relative to Jupiter and Spica, as seen from mid-northern North American latitudes. From the world’s Eastern Hemisphere – Europe, Africa, Asia, Australia and New Zealand – the moon is offset somewhat toward the previous date. As always, the green line depicts the ecliptic – the sun’s annual pathway in front of the constellations of the zodiac.

This is a marvelous time to start watching Jupiter. Earth will fly between this giant planet and the sun on April 7. This will be Jupiter’s opposition for 2017, when the planet appears opposite the sun in our sky, rising when the sun sets, brightest for the year.

Especially around now when the planet is so nearly at its best, you can actually view Jupiter’s moons as pinpoints of light with a modest backyard telescope or even good binoculars. Find out the present position of Jupiter’s moons on this handy chart, courtesy of skyandtelescope.com.

Three of Jupiter’s four largest moons are larger and more massive than Earth’s moon. In their outward order from Jupiter, the four major moons of Jupiter are Io, Europa, Ganymede and Callisto. Europa is a touch smaller and less massive than our own moon.

We’ve been asked why Jupiter’s moons move so quickly around Jupiter, although all four of Jupiter’s major moons lie farther away from Jupiter than our moon’s distance from Earth. For instance, Io – Jupiter’s closest moon – has a semi-major axis of 262,094 miles (421,800 km) in contrast to the semi-major axis of our moon: 238,855 miles (384,400 km). Despite Io’s greater distance from its parent planet, Io revolves around Jupiter in 1.769 days. Meanwhile, our moon takes a whopping 27.322 days to orbit Earth. Why?

It’s Jupiter’s great mass that causes Io and Jupiter’s moons to move so quickly around Jupiter. The giant planet Jupiter has more than twice the mass of all the other solar system planets, dwarf planets, asteroids and moons combined. Jupiter’s mass is 318 times that of the Earth.

Just as treasures are uncovered from the earth, so virtue appears from good deeds, and wisdom appears from a pure and peaceful mind. To walk safely through the maze of human life, one needs the light of wisdom and the guidance of virtue.

Today’s Meaning:
This aspect of your life will be strongly influenced by a person who is friendly, humanitarian, honest, loyal, original, inventive, independent and intellectual. If you can identify this person get close to them–they can be quite helpful.

General Description:
Eleventh sign of the Zodiac, Jan 20th to Feb 19th. Ruling planet Uranus; correct metal lead. Those born under the influence of the Aquarius were supposed to be intelligent, of strong will power, restless, inventive, deep thinkers, artistic and cautious in money matters. The Aquarius gems are Garnet and Hyacinth. The Garnet, through India and Persia, was a favorite amulet against plague and poison, also worn to attract cheerfulness and good health. In the middle ages used as a charm to protect against all inflammatory disease and to ensure happiness. It was also supposed to warn its wearer of approaching peril and danger. The Outlook for the Week Ahead, March 13th

Past Influence whose impact on your life is waning.

The iridescent emerald plumage and spectacular broad tail of The Peacock make it the ideal symbol of both justified pride and vanity. It denotes the right for one to be proud of themselves for being who they are and for letting others know. In short, its okay to strut a bit. At the same time The Peacock reminds us that while pride and high self esteem are essential components of a healthy psyche, becoming too full of one’s self makes us vain, and vanity is never attractive in anyone.

Where the Green Man appears the mystery and untamed energy of nature abounds. The Green Man indicates the presence of choices and powers that have not been muted by civilization. The Green Man represents the antithesis of technology and industrialization. He offers primal energies veiled in mystery and derived from the spirit of nature in its purest form.

Strength denotes an inner power, mastery of will, development of inner might, and the ability to lead effectively. Through mastering one’s emotions and learning from both success and failure the person Strength represents has reached a place where they are influential without applying physical force, able to weather the roughest of storms, and not likely to abandon the less fortunate. Strength also denotes a large capacity for forgiveness and compassion. Strength is not as much about winning as it is about overcoming hardship, and using well crafted persuasion to ease others to your side.

As a daily card, The Protector denotes the immediate presence of a commanding ally working to put the balance of power in your favor. The protector is especially powerful at helping you get what you rightfully deserve and thwarting underhanded schemes aimed at keeping you down.