Just wanted to let you know we will have more information on the Full Moon tomorrow. We will also be published our information here as usual even though it is a Saturday. Also, you might want to check the podcast in about an hour or two. We are providing a spell of the day that stops the powers of your enemies and also an impromptu discussion on Black Magick and other topics that pertain to it.

Till tomorrow, my sweets……

Witches of the Craft Podcast 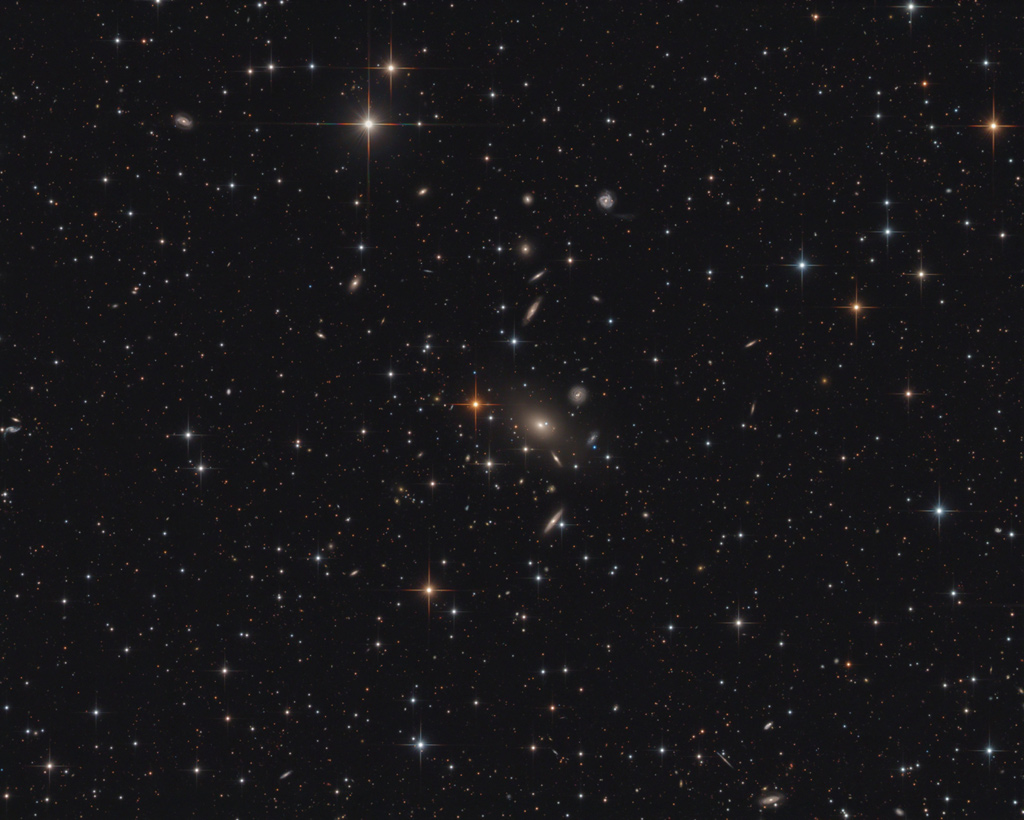 Explanation: The galaxies of Abell 2666 lie far beyond the Milky Way, some 340 million light-years distant toward the high flying constellation Pegasus. Framed in this sharp telescopic image, the pretty cluster galaxies are gathered behind scattered, spiky, Milky Way stars. At cluster center is giant elliptical galaxy NGC 7768, the central dominant galaxy of the cluster. As the cluster forms, such massive galaxies are thought to grow by mergers of galaxies that fall through the center of the cluster’s gravitational well. Typical of dominant cluster galaxies, NGC 7768 likely harbors a supermassive black hole. At the estimated distance of Abell 2666, this cosmic frame would span about 5 million light-years.

By Daniela Breitman
Faithful Comet Encke – one of the shortest-period comets known – is closest to the sun today. Read how its frequent returns helped reveal the true nature of comets.

Comet Encke, known for its short orbital period of 3.3 years, is at its closest point to the sun today (March 10, 2017). This point called its perihelion, with the word stemming from the Greek words peri, meaning near, and Helios in honor of the Greek god of the sun. Is the comet visible in our sky now? No. It was visible in February and possibly until early March, whipping around the Circlet asterism in the constellation Pisces, in the west shortly after sunset. Now, however, Comet Encke has plunged southwawrd and become lost in the glare of evening twilight.

Comet Encke visits us often and is now on its 63rd known visit to our part of space, with uncounted visits before those 63. And thus it’s a well-studied comet and an interesting comet, for many reasons.

Encke is considered a short-period comet, and its orbit is much shorter than – for example – the brighter and more famous Comet Halley, known for its appearances to the unaided eye in Earth’s sky. Halley’s orbital period is about 75-76 years, and it last appeared in Earth’s sky in 1986 and will next return in 2061. Is Encke the shortest-period comet known? Not exactly, although it’s the shortest-period comet that becomes visible to observers using modest telescopes or binoculars. The exceedingly faint main-belt Comet 311P/PANSTARRS, for example, has a slightly shorter period of 3.2 years.

Comet Encke has a fascinating history. As its official designation implies, 2P/Encke was the second comet recognized as periodic, after 1P/Halley. Prior to the time of those recognitions, comets will little understood objects – considered bad omens by the early skywatchers – thought to appear only once, ever, in our sky.

In 1819, Encke published his conclusions in the early journal Correspondance Astronomique, correctly predicting the comet’s return in 1822.

The recovery of Encke’s Comet by Carl Ludwig Christian Rümker on June 2, 1822 was another great victory for the ability of the scientific method to make testable predictions. We say “another” victory because Comet Halley had been the very first comet ever predicted to return, and subsequently recovered on time, in 1758. Hence, 1P/Halley and 2P/Encke.

Notice that the pace of scientific discovery was much slower then!

This video, captured by NASA’s STEREO mission, shows the motion of Comet Encke and its tail as it approached the sun in April 2007. At that return, scientists studied the movements of hundreds of dense chunks of glowing ionized gas within the comet’s tail, finding evidence of turbulence that helped explain both the solar wind’s variability and its unexpectedly high temperatures. Read more about this image from NASA/ STEREO.

In addition to calculating Comet Encke’s orbital period of 3.3 years, Encke also calculated that the comet’s orbit decays by 2.5 hours at each return near the sun. The reason for the decay remained a mystery until Fred Whipple – who was also the first to describe comets as dirty snowballs – explained it in 1950. Whipple said Comet Encke’s orbit becomes continually shorter because matter boils off its surface, producing a jet-like force that reduced the motion of the comet.

More recently, other theories have been proposed as to why a comet’s orbit might decay. The Yarkovsky effect, although usually applied to asteroids, can offer another viewpoint. Comets receive light from the sun. Some of it they absorb and some of it they reflect back. This emitted light is usually infrared. The Yarkovsky effect proposes that the heated photons from this emission generate a force on that comet since they have momentum.

Simply put, the Yarkovsky effect is nothing but another case of Newton’s 3rd law. Hot photons hit the surface of the comet and the “comet pushes back” as they bounce off it.

By the way, Comet Encke spawns a meteor shower – a long-lasting one in which many very bright meteors, or “fireballs” can be seen – known as the Taurids. The South and North Taurids appear in late October and November each year and occur as Earth passes through debris in space left behind by Comet Encke.

Read more about the Taurids here.

Bottom line: Comet Encke, known for its short orbital period of 3.3 years, sweeps closest to the sun on March 10, 2017. The comet is now on its 63rd known visit to our part of space.

Daniela Breitman – a Canadian writer, formerly with From Quarks to Quasars – is currently studying Applied Sciences with the goal of becoming an astrophysicist. An amateur photographer, she also loves writing and literature and is a huge science fiction fan. In fact, she’s passionate about many things.

The mind is everything. What you think you become.

Today’s Meaning:
This aspect needs to be lightened up a bit, things are getting to serious. Some humor or even a bit of flirting could lighten the tone greatly.

General Description:
The use of this, one of the most ancient charms, dates back to the commencement of our present civilization, and was in use previous to the Jewish dispensation. The symbol has been used in almost every religion, and was considered all powerful, efficient, and the perfect sign of the absolute. The triangle with the apex upwards symbolized all that was good and the inverted triangle all that was evil, and the two combined in the device portrays the triumph of good over evil. The seven discs represent the seven then known planets. This charm was worn to protect the wearer from every description of mischief and danger, and was a preserver from all evil.