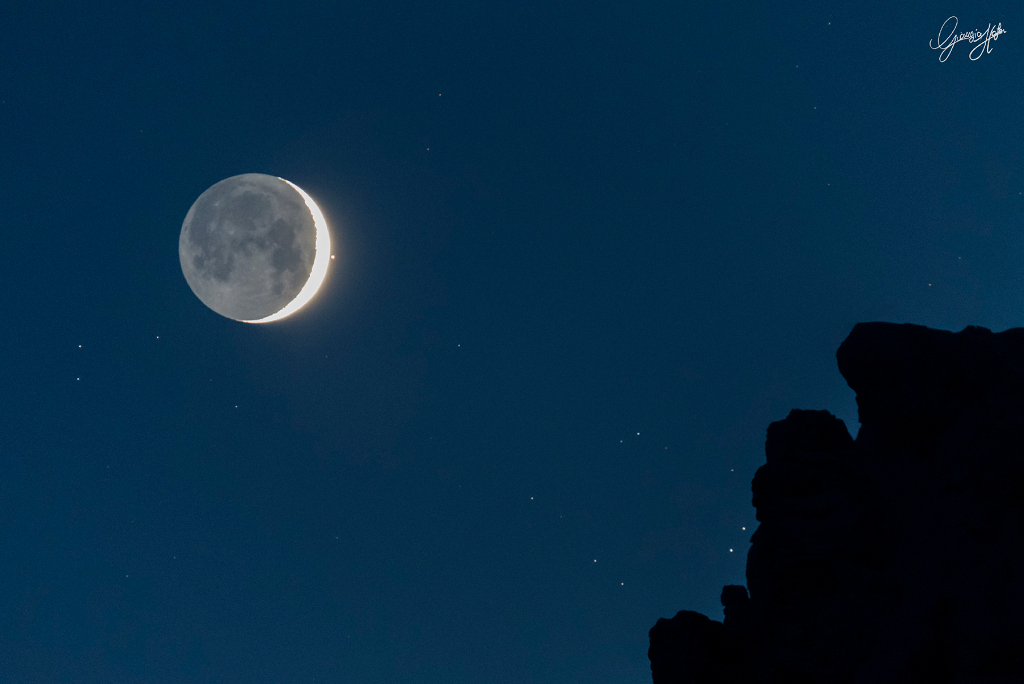 Explanation: Aldebaran, eye of Taurus the Bull, and a young crescent Moon shared an early evening sky last Friday. The lovely celestial pairing could be enjoyed around planet Earth, but from some locations the Moon was even seen to pass in front of Aldebaran, a dramatic lunar occultation of the familiar bright star. Taken at nightfall on April 28, this skyscape captures Aldebaran shortly after it emerged from behind the bright lunar limb. In the foreground are craggy peaks of the Dolomite mountains near Laggio di Cadore, Italy. Before reappearing beyond the sunlit crescent, Aldebaran first winked out behind the Moon’s ashen glow, the lunar nightside faintly illuminated by earthshine.

By Bruce McClure in ASTRONOMY ESSENTIALS | May 5, 2017

Everything you need to know about the 2017 Eta Aquariid meteor shower, which peaks on the mornings of May 5 and 6. How to watch, history, radiant point, what part of Earth is favored.

The Eta Aquarid meteor shower is active between April 19 and May 28, and this shower’s peak is broad. If you’ve looked in a dark this week, you might have seen some of these meteors, although we’re hearing that they’ve been sparse so far. In 2017, the forecast calls for the greatest number of Eta Aquariid meteors before dawn on May 5 or 6. The moon is in a waxing gibbous phase and will set in the wee hours after midnight. This shower favors the Southern Hemisphere, ranking as one of their finest showers of the year. At mid-northern latitudes, these meteors don’t fall so abundantly – and twilight is long and so interferes at northerly latitudes – but mid-northern meteor-watchers who try will likely catch some Eta Aquarids, too. Follow the links below to learn more about the Eta Aquariid meteor shower.

When and how should I watch the Eta Aquarids?

How many meteors should I expect to see?

Why more Eta Aquarid meteors in the Southern Hemisphere?

Halley’s Comet is the source of the Eta Aquarid meteor shower.

Enjoying EarthSky so far? Sign up for our free daily newsletter today!

When and how should I watch the Eta Aquariids? The 2017 Eta Aquariid meteor shower is expected to produce the greatest number of meteors in the wee hours before dawn on May 5 and 6. However, the broad peak of the Eta Aquariid shower may present a decent showing of meteors during the predawn hours on May 4 and May 7, too. And in fact the shower extends much beyond these dates on either side. Writing for the International Meteor Organization on May 1, 2017, Robert Lunsford pointed out:

… There is no sharp peak for this shower, but rather a plateau of good rates that last approximately one week centered on May 6.

In fact, Lunsford recommended watching earlier in the week, to avoid the moon. Whether you have tried that – or plan to watch closer to the peak – you’ll want to keep an eye on moonset times. A waxing gibbous moon will shine in the sky during the shower’s peak. On the peak mornings, the moon is setting a few hours before dawn, leaving a window for meteor-watching. But the moon is now setting later each morning, interfering more and more with the shower. For this reason, for example, the morning of May 5 might be a better time to watch than the morning of May 6. Click here, and check the moonrise and moonset box, to know when the moon rises and sets in your sky.

In general, the best time to watch these fast and often bright meteors is in the early morning hours, before the onset of morning twilight. Don’t know when twilight begins in your part of the world? Try one of the links on our almanac page.

Give yourself at least an hour of viewing time for watching any meteor shower. Meteors tend to come in spurts that are interspersed by lulls. Also, it can take as long as 20 minutes for your eyes to adapt to the dark.

You need no special equipment to watch a meteor shower, but a little luck always helps. Meteor watching is a lot like fishing. Sometimes you catch a good number of them and sometimes you don’t.

Radiant point of Eta Aquarid meteor shower. It’s in the constellation Aquarius, in the southeast before dawn on May mornings, as seen from mid-northern latitudes.

Meteor shower radiants are sometimes misunderstood by casual meteor-watchers. You don’t need to know where they are to watch a meteor shower. That’s because the meteors fly every which way across the sky, in front of numerous constellations. However, the higher a shower’s radiant appears in your sky, the more meteors you’re likely to see. For the Eta Aquarids, the radiant soars highest in the nighttime sky just before dawn. That’s why you can expect to see the most meteors in the wee morning hours.

You can see some Eta Aquarid meteors in late evening, before the radiant rises into your sky. In fact, late evening is the best time to see earthgrazers, meteors that make exceptionally long streaks across your sky. As the radiant rises higher – that is as the hours of the night tick away to dawn – you’ll see shorter meteors, but more meteors.

No special equipment is needed to watch a meteor shower. Find a dark, open sky away from artificial lights, and sprawl out on a reclining lawn chair.

Halley’s Comet, the parent of the May Eta Aquarid and October Orionid meteor showers. Image Credit: NASAblueshift. Dust from this comet will streak the nighttime as Eta Aquarid meteors on the mornings of May 5 and 6.

Halley’s Comet is the source of the Eta Aquariid meteor shower. Every year, our planet Earth crosses the orbital path of Halley’s Comet in late April and May, so bits and pieces from this comet light up the nighttime as Eta Aquarid meteors. This shower is said to be active from April 19 to May 20, although Earth plows most deeply into this stream of comet debris around May 5 or 6.

The comet dust smashes into Earth’s upper atmosphere at nearly 240,000 kilometers (150,000 miles) per hour. Roughly half of these swift-moving meteors leave persistent trains – ionized gas trails that glow for a few seconds after the meteor has passed.

Our planet also crosses the orbital path of Halley’s Comet at the other end of the year, giving rise to the Orionid meteor shower, which is usually at its best in the predawn hours on or near October 21.

Why not see how many Eta Aquarid meteors you’ll catch in the dark hours before dawn on May 5 and 6?

Today’s Meaning:
The hand indicates you will need to extend effort to protect this aspect from outside influences. The devices attached indicate you will need tools to be successful in your protection.

General Description:
The use of a representation of the Hand as a talisman can be traced back to at least 800 years B.C., when it was used as a charm against enchantment. Many varieties of the Hand exist; in some the elaboration is very marked, each devise represents some particular charm. Life size models of these Hands were supposed to guard the house against all the influences of magic and evil, and smaller replicas protected their wearers from every description of harm. The extended thumb and first two fingers, the third and fourth fingers closed, is the position still assumed during the benediction in some Christian Churches of today. The Hourglass is a gentle reminder that time passes and with it goes opportunity. Every moment is a moment we cannot retrieve or relive, and there are no guarantees that what we put off today really can be done tomorrow. The Hourglass urges us to make every second of our lives as rich and fulfilling as we possibly can.

As a daily card, The Hourglass suggest you may be allowing opportunities to pass you by. If you’ve been procrastinating or putting too much of your precious time into activities with no lasting value to you, now is the time for you redirect your energies into actions that will enrich your life. The Empress is “The Earth Mother” of the Tarot. She embodies all that is nurturing, clean and wholesome. Her powers resonate from her drive to create and care for life on a grand scale. She is in tune with Nature’s rhythm and realizes that life’s most pleasurable moments often stem from the simplest things. She is not afraid to enjoy herself–to let loose—to the point of being lavish. Abundance and luxury are important to her. The Empress is completely comfortable with her femininity and her sexuality. She is sensual, earthy, generous, and likes the good life. Still, her driving force is a need to create and nurture, and fulfilling this need overrides everything else.

Your Influences for the Up-Coming Weekend

Good things may come from unforseen sources. Freedom from burdens and the easing of tension are possible.

The Ram is energetic, courageous, optimistic and obstinate. The Ram is not a quitter! He will get his way!

Earth is the card of everyday life. Earth makes riches of all kinds available to those who are in tune with her. 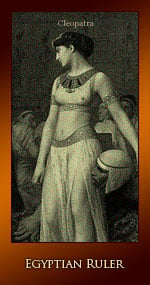 Choosing the Egyptian ruler card represents the presence of one of the pharaohs in your life. The Egyptian pharaohs dedicated their lives to reincarnating from the dead into a living and worthy vessel. Their presence ties you directly to the mystical, because the Egyptians believed that reality was just a reflection of a metaphysical journey through the paradise of the departed. The pharaoh is the living bridge between the two worlds and when one is with you, you are blessed to bring heaven to Earth. 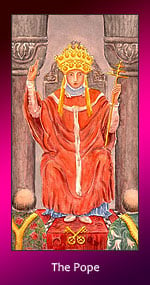 A Pope selected you to suggest that someone in your life is stubborn or refuses to compromise. It may or may not be you, but the bottom line is that a person is inflexible and sure their perceptions are right even when they see that they aren’t. The door is open to the error of ways when it comes to someone who thinks they know everything but understands little.