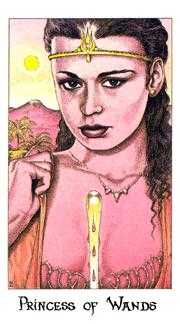 This suit, most often called “Wands” and sometimes called “Rods” or “Staves,” represents initiative, ambition, drive and desire. This is the suit of enterprise and risk-taking.

This card is traditionally entitled the Page, but in some modern decks appears as a Princess. This archetype is that of a unique individual, a nonconformist, often something of a bohemian, definitely independent by nature. He or she requires little in the way of affirmation or approval. Perhaps a mischief-maker, often an innovator or inventor, the energy represented by this card will only serve others until he or she figures out how to get others to serve him/her.

This person’s freedom is so important they would rather go as a peasant among strangers than inherit a fortune with strings attached. Don’t be fooled by this humble appearance. This person is a future captain of industry or world leader, now serving an apprenticeship. These people are sometimes seen planting a staff like a flagpole into the earth in the far off wilderness (where they can start fresh without having to make any compromises). You could think of this card as a wild card.