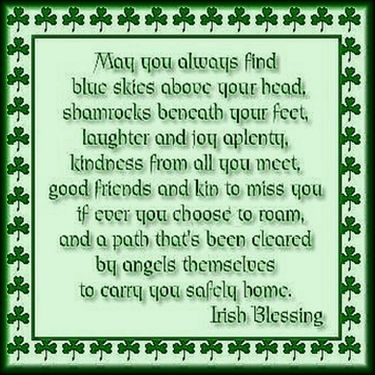 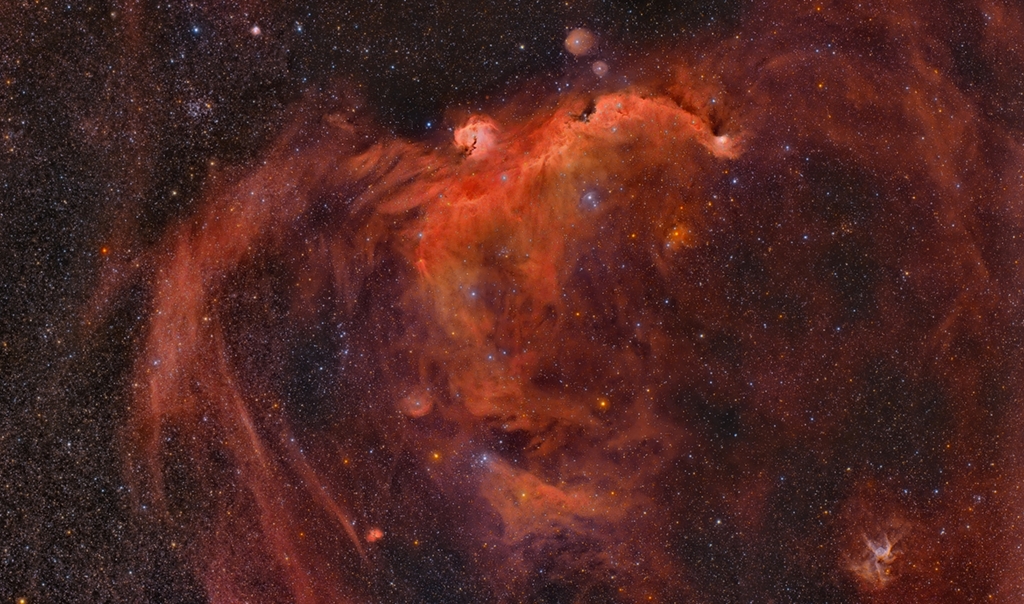 Explanation: Seen as a seagull and a duck, these nebulae are not the only cosmic clouds to evoke images of flight. But both are winging their way across this broad celestial landscape, spanning almost 7 degrees across planet Earth’s night skytoward the constellation Canis Major. The expansive Seagull (top center) is itself composed of two major cataloged emission nebulae. Brighter NGC 2327 forms the head with the more diffuse IC 2177 as the wings and body. Impressively, the Seagull’s wingspan would correspond to about 250 light-years at the nebula’s estimated distance of 3,800 light-years. At the lower right, the Duck appears much more compact and would span only about 50 light-years given its 15,000 light-year distance estimate. Blown by energetic winds from an extremely massive, hot star near its center, the Duck nebula is cataloged as NGC 2359. Of course, the Duck’s thick body and winged appendages also lend it the slightly more dramatic popular moniker, Thor’s Helmet.

Westward shift of Orion and all the stars

We always get this question at this time of year:

Orion seems to have moved and turned considerably in the last two weeks. Will Orion disappear before summer?

The answer is yes, it’ll soon disappear into the sun’s glare. And – although you might notice it more easily with this particularly bright and noticeable constellation – the fact is that, like Orion, all the stars and constellations shift westward as the seasons pass. Unless they’re in the far northern or southern sky – and so circumpolar – all stars and constellations spend some portion of each year hidden in the sun’s glare. In other words, like blooms on trees or certain flowers or even specific animals in your locale, stars have their own seasons of visibility.

Of course, stars and their constellations also move westward in the course of a single night, due to Earth’s spin. Orion is no exception.

Exactly when Orion will disappear from your evening sky – into the sunset – depends on your latitude. The farther south you are, the longer you can see Orion. But for the central U.S., Orion is lost in the sun’s glare by early to mid-May (depending on how carefully you look for it).

And for all of us in the U.S., Orion is gone by the time of the summer solstice in June.

Either way, you can easily notice Orion moving steadily westward.

Bottom line: Why the constellation Orion – and all the stars – shift westward as the seasons pass.

The Moon is traveling through Pisces today. You may feel disconnected. Serve others. Listen to music. Paint a picture. Daydream.

We are not inclined to want to face reality while the Moon is in dreamy, impressionable Pisces. It can be a wistful, sensitive, intuitive, and compassionate time. We are especially imaginative, and our intuition reigns under this influence. Boundaries and walls come down, as Pisces energy merges and blends. It’s a time when details are overlooked and feelings defy description.

The Moon today is in a Waning Crescent phase. In this phase the Moon’s illumination is growing smaller each day until the New Moon. During this phase the Moon is getting closer to the Sun as viewed from Earth and the night side of the Moon is facing the Earth with only a small edge of the Moon being illuminated. This phase is best viewed an hour or 2 before the sunrise and can be quite beautiful if you’re willing to get up early. It can also be a great time to see the features of the Moon’s surface. Along the edge where the illuminated portion meets the dark side, the craters and mountains cast long shadows making them easier to observe with a telescope or binoculars.

Hatred does not cease by hatred, but only by love; this is the eternal rule.

Query: How will our weekend be?

Informative as ever, lol! 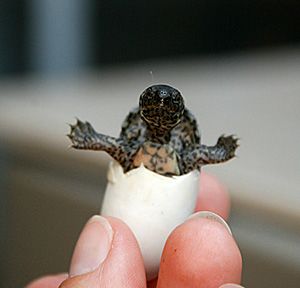 It’s a baby! A Baby Turtle! I wonder if he is looking at the person holding him wondering, “Are you Mommie?” 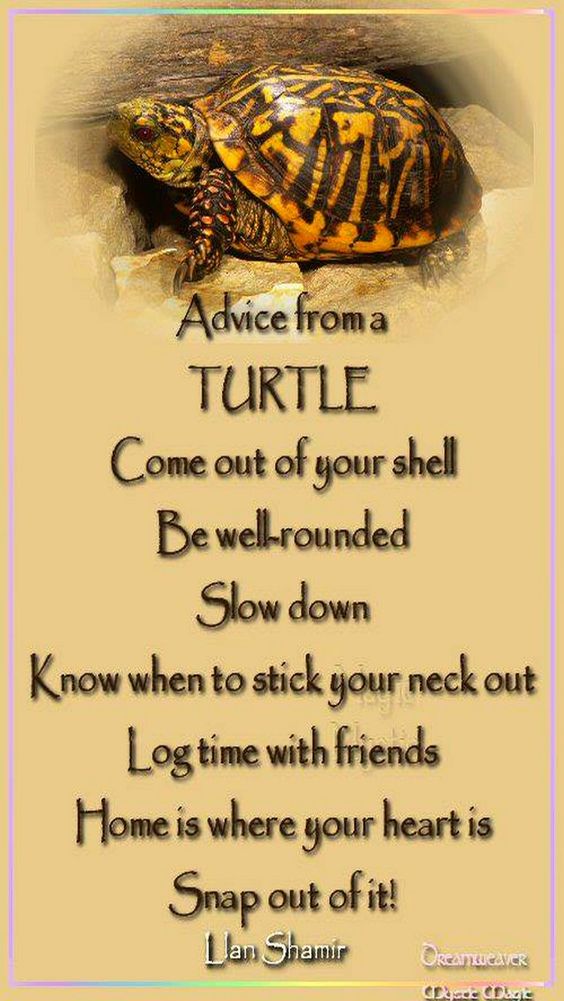 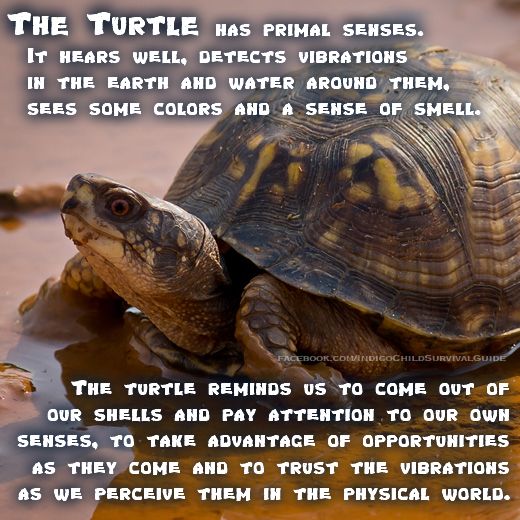 Meaning: The presence of the spear signifies arguments, negative events, and all manner of strife of an upsetting nature. However similar to the ‘Tower’ tarot card if next to a positive rune it could mean the end of an argument or quarrel. If with the rings it means the healing or renewal of a relationship. If there are military connections it could mean promotion. If illness is within the equation it means a speedy and successful recovery. 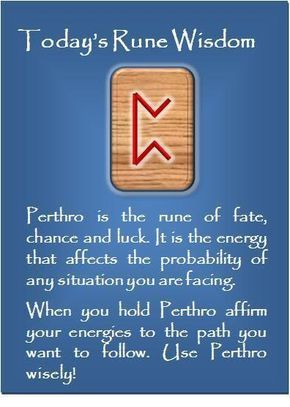 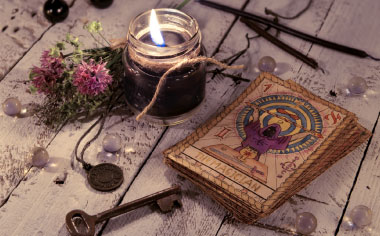 SWEET TALKING
Can you make a demand for the impossible in order to get the most of what is possible to have?

The elegant Swan is an ideal symbol of beauty and grace. Its flowing curves and fluid movement give an ethereal air of perfection realized. The Swan’s beauty embodies the feminine (Yin) qualities of intuition and sensitivity. But The Swan does not begin life as a creature who appears to be the creation of divine inspiration. Indeed at birth The Swan is an ungainly creature that lacks any indications of the magnificent being it is destined to become. The Swan’s transformation from ordinary to extraordinary have made it an emblem of discovering the beauty and power of your true self.

As a daily card, The Swan is a reminder of the beauty, creativity and power your true self embodies. In this period it is best to let the real you rule and be known to all–to remember who you really are and what you are really about. The Swan also marks a time when your creative powers may be at their zenith.

Art denotes balance and harmony. The forces behind Art are those that keep us from succumbing to temptation or over-indulgence; steer us away from developing unhealthy addictions or behaviors. The Art driven Spirit avoids extremes, spreads harmony and brings opposing sides together. They find a happy, healthy median between what they want and what they need. Art provides an environment in which most will thrive, and a haven where the injured may heal, reenergize. Through Art success and contentment are found by practicing self-restraint, and using balance to create your own “shelter from the storm.”.