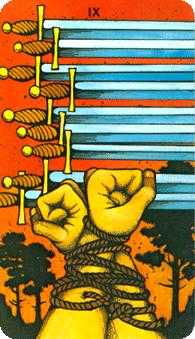 The Nine of this suit has a special resonance with the Middle Ages, because it figures the plight of a woman who is alone in the world, during the centuries when women had no personal rights, no ability to inherit property or use the law in their own defense. We generally see her sitting up in bed weeping, grieving and in fear of abandonment because of her vulnerability, wondering what will happen to her now that her protector (father, brother, husband, or son) is gone.

The swords above her head may indicate that the loss has come through some cruel conflict, the outcome of which has left her behind as chattel, the spoils of war. Really what we are looking at is the price of pride, which creates losers as a side effect of glorifying winners. The woman in the picture represents the concerns of the heart, the damage to the soul and to vulnerable ones, when the ego-mind becomes so invested in control and domination that it does not count the human costs. A sensitive, subtle, heartfelt approach to nature (the “feminine”) is trampled and thrown aside in service to a “winner takes all” mentality.