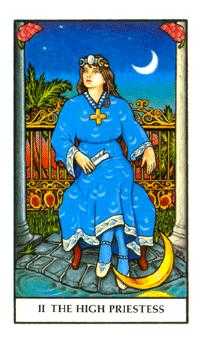 Traditionally entitled “The High Priestess,” this major arcana or “trump” card represents human wisdom — whether viewed as a kind of female Pope, the ancient Egyptian Priestess of Isis, the even more ancient Snake and Bird Goddesses, the Greek Goddess Persephone, or the Eve of Genesis before the Fall.

For the accused heretics who were burnt at the stake for revering her in the 14th and 15th century, she symbolized the prophecy of the return of the Holy Spirit, which was perceived as the female aspect of the Holy Trinity.

In terms of the major arcana ordering of cards, the High Priestess appears in the sequence as soon as the Fool decides he wants to develop his innate powers, making a move toward becoming a Magus. The High Priestess is his first teacher, representing the Inner Life and the method for contacting it, as well as the contemplative study of Nature and the Holy Mysteries.