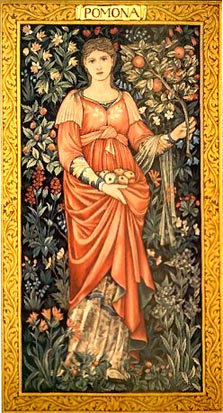 Areas of Influence: Pomona was one of the Numina, the Roman guardian spirits who watched over people, homes and special places. She protected fruiting trees and gardens.

She is an agricultural Goddess , responsible for the care and cultivation of fruit trees and orchards. Her name is actually derived from the Latin word pomun, meaning fruit. Her dedication to her work left her little time for love. She turned down the offers of marriage from Silvanus and Picus but was eventually tricked into marriage by Vertumnus. This deity was served by high priests known as Flamen Pomonalis in a sacred grove known as the Pomonal.

Origins and Genealogy: I can find no references to her parents, siblings and children.

Strengths: A nurturer, dedicated to her job. As a fertility Goddess she represented abundance.

Weaknesses: So busy looking after her trees that she has little time for herself.

Symbolism: A popular figure in art she is shown as a beautiful Goddess carrying a knife to prune with and a platter of fruit or a cornucopia.

Festival: A feast was held annually on the November 1st when apples, nuts and grapes were consumed to celebrate the harvest.

Unlike many of the Roman Goddesses she has no specific Greek equivalent.

The Mother is a life-giver and the source of nurturing, devotion, patience and unconditional love. The ability to forgive and provide for her children and put them before herself is the essence of a good mother.

In its shadow aspect the Mother can be devouring, abusive and abandoning. The shadow Mother can also make her children feel guilty about becoming independent and leaving her. It is not necessary to be a biological Mother to have this stereotype. It can refer to anyone who has a lifelong pattern of nurturing and devotion to living things.

As Goddess of the harvest she represents the Mother Archetype as she nurtures the fruits, trees and the plants in the garden.

How to Work With This Archetype

Colors: Red, yellow, green
Element: Earth
Altar: Upon cloth of any or all of these colors, lay baskets of apples (preferably the old Roman variety “Lady”)and other tree fruit, a jug of cider, and a pruning knife.
Offerings: Water fruit trees.
Daily Meal: Vegetarian, with any food made with apples.

Lady of the Apple Tree
Whose red-cheeked visage greets the dawn,
Lady of the Pear Tree
Whose sweetness salves the questing tongue,
Lady of the Peach Tree
Whose blush transforms the morning sky,
Lady of the Plum Tree
Whose scent entices, smooth and smiling,
Lady of the Cherry Tree
Whose scarlet lips are drenched in raindrops.
Lady of the blossoming branch
Who entices bees to dance with you,
Lady of the secret orchard
Where Vertumnus gained his entry,
Where he came in secret, clothed in
Vestments of the ancient Crone,
God of growth, god of seasons,
God of turning, he took you there
As you offered up your nectar
And all the trees above you burst their buds.
Lady of the ancient ones, the Trees
Who give forth their children one by one
That we may know not just mere survival
But sweetness as well, help us to remember
The beauty and abundance of your gifts.

The Magical Energy of Apples

Apples are magical, especially around the time of the autumn harvest.

Apples have always been popular tools for foretelling the future. There are a number of traditional methods in folklore for seeing who one’s lover might be.

Because of its associations with the harvest, the apple is perfect for Mabon magic. Try the Apple Harvest rite, or honor the goddess Pomona at the harvest.

In addition to being tasty and sweet, apples are perfect for craft projects. Try one of these to decorate your home with magical apple energy.

Pomona was a Roman Goddess who was the keeper of orchards and fruit trees. Unlike many other agricultural deities, Pomona is not associated with the harvest itself, but with the flourishing of fruit trees. She is usually portrayed bearing a cornucopia or a tray of blossoming fruit. She doesn’t appear to have had any Greek counterpart at all, and is uniquely Roman.

In Ovid’s writings, Pomona is a virginal wood nymph who rejected several suitors before finally marring Vertumnus – and the only reason she married him was because he disguised himself as an old woman, and then offered Pomona advice on who she should marry. Vertumnus turned out to be quite lusty, and so the two of them are responsible for the prolific nature of apple trees. Pomona doesn’t appear very often in mythology, but she does have a festival that she shares with her husband, celebrated on August 13.

Despite her being a rather obscure deity, Pomona’s likeness appears many times in classical art, including paintings by Ruben’s and Rembrandt, and a number of sculptures. She is typically represented as a lovely maiden with an armful of fruit and a pruning knife in one hand. In J.K. Rowling’s Harry Potter series, Professor Sprout, the teacher of Herbology — the study of magical plants — is named Pomona.

About Samhain: A Guide to the Sabbat’s Symbolism

Primary meaning: Samhain, pronounced “sow-en” — not “sam hain” — marks the beginning of the cold months or winter; it is the Day Between the Years. Primary elements to contemplate are endings and beginnings, change, reflection and reincarnation. Celebrations honor the dead, ancestors, the wisdom of the Crone and the death of the God.

Customs and myths: In England, it formerly was the custom to go “a-souling” on this night, asking for little “soul cakes” and offering prayers for the dead in return.

In the British Isles, lanterns carved out of turnips (in the New World pumpkins) were at one time used to provide light on a night when bale fires were lit, and all households let their fires go out so they could be rekindled from the new fire.

Another custom was the Dumb Supper, in which an extra plate was laid for the dead and the meal was eaten in silence. Bobbing for apples, roasting nuts in the fire and baking cakes that contained tokens of luck are ancient methods of telling the future now. Ducking for apples was a divination for marriage. The first person to bite an apple would be the first to marry in the coming year. Apple peeling was a divination to see how long your life would be. The longer the unbroken apple peel, the longer your life was destined to be.

In Scotland, people would place stones in the ashes of the hearth before retiring for the night. Anyone whose stone had been disturbed during the night was said to be destined to die during the coming year.