Today we are exploring the meaning of the number 3 card in the major arcana and each suit of the minor arcana in a tarot deck. If there is a “Menu of Contents” please scroll down to see if other tarot decks are listed besides the one pictured.

From Tarotx.net – Scroll down click to on hyperlink for more information about the High Priestess in other tarot decks

From Tarotx.net – Click here for more information about 3 of Wands from Shadowscape Tarot Card Deck

Three of Wands from the Shadowscapes Tarot Minor Arcana

I. The meaning of the Three of Wands Shadowscapes Tarot

This is the bridge that reaches the edge of the world. The lower steps below tempt those who are curious and brave to go there and embark on a dangerous journey. It bent across the sky but then did not go much further. She stood on the borderline and hesitated, and wondered where she was going. The dazzling sunlight overhead made her squint, radiating beneath the shimmering bands of light that stretched along the river, reflecting on the hill in the distance below. Like a crystal with endless energy, slowly rising, it brought with itself the eternal light like all the potential she had, waiting for her from deep within, with every breath, every moment that contains the ability that either discourages or encourages us. Be aware of the hidden potential in all things.

She looked at the wands of the travelers who had first arrived. It could also be that from this position they turn away and leave, just like a threat to what happens to the next ones. She hesitated for a moment, did not look down, and then stepped into the indeterminate place. She felt the strong rocks and clay beneath her feet, then realized the bridge was gradually perfected from the steps and dreams of others. She took a breath and then began to take the first step – just like that, step by step, the bridge accordingly grew below her feet.

Through this, the message that Three of Wands wants to send you is to explore, search for new things, discover and expand to new horizons. Let’s broadcast your vision in all situations and clearly show your leadership.

II.The Three of Wands Shadowscapes Tarot in a spread

The Three of Wands Shadowscapes Tarot is a card of…

From Tarotx.net – Click on hyperlink for more information about 3 of Vessels from the Wildwood Tarot Deck 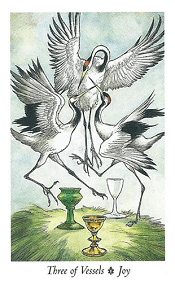 Three of Vessels – From the Wildwood Tarot Deck Minor Arcana

From Tarotx.net – Click on hyperlink for more information about 3 of Swords from the Rider – Waite Tarot Deck 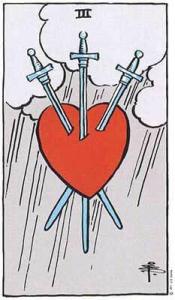 3 of Swards – From the Rider Waite Tarot Deck Minor Arcana

From Tarotx.net – Click on hyperlink for more information about 3 of Stones from the Wildwood Tarot Deck