“…There have been many waves of Beltane festivals, each in its own generation with a different facet, but all saying ‘We Need To Celebrate’”
– Margaret Bennett, 2006

To the pastoral Celtic people’s of Europe the changing pattern of the seasons was a matter of life and death, and marking these changes key moments in the life of the community. Beltane – “bright fire” – was one such marker celebrated in various forms across Ireland, Scotland and Man as the starting point of summer. A celebration of the time of light and growth to come, Beltane was associated with a variety of practices, from the display of fresh greenery to the baking of Beltane bannocks. Perhaps the most important element, however, was the lighting of Beltane fires on the first of May, which would recall the growing power of the sun and provide an opportunity to cleanse and renew the conditions of a community – both humans and their animals – that had spent the dark months indoors. In Scotland, the lighting of Beltane fires – round which cattle were driven, over which brave souls danced and leapt – would survive into modern times, although a process of slow decline saw towns and villages slowly abandon the practice in the nineteenth century. The last Beltane fire recorded in Helmsdale took place in 1820. In the middle years of the century the fires of Fife spluttered out, and by the 1870s they would go unlit in the Shetland Isles. By the start of the twentieth century, Edinburgh, which had for time immemorial seen beacons lit on Arthur’s Seat, ceased such public Beltane celebrations.

In 1988 Edinburgh’s Beltane fires were brought to life once more, led by Angus Farquhar – then of industrial band Test Dept, who took part in the first Beltane performance, now ofNVA. The inspiration here was the idea of recreating a sense of community and an appreciation of the cyclical nature of the seasons and our connection to the environment. With the aid of choreographer Lindsay John and a folklorist Margaret Bennett of Edinburgh University’s School of Scottish Studies, this first performance drew on existing folk traditions surrounding Beltane to create a modern celebration of the festival which has continued to grow and evolve as the years have gone by.

This first modern Beltane saw only five performers take to Calton Hill, watched by an audience of fifty to a hundred people. Within five years this had grown to several hundred performers and three thousand audience members, during which time the Society came into place to support the continuation of the festival. While Arthur’s Seat had traditionally been the location for Edinburgh’s Beltane celebrations, at the time of the planning of the ‘new’ Beltane Festival a location was needed that was more accessible and central, while still maintaining an association with nature and the environment. Calton Hill also at that time had a bad reputation relating to sex and drugs and was a ‘no go’ area of the city, and part of the aim was to ‘reclaim’ that space for the local community through our celebrations.

As the Beltane Fire Festival has grown and developed, change has been inevitable. In 1992, Angus Farquhar organised his last Beltane, and the following year the Beltane Fire Society formed to take on his mantle. By 1999, audience numbers had reached ten thousand, and in 2001 the Festival took on its first paid production manager to co-ordinate the growing event, currently a part-time paid role in an otherwise volunteer organisation. Growing costs, attendance numbers and council licensing requirements meant that in 2004 the decision was made for the previously free event to be ticketed for the first time. An admission charge did little to effect the festival’s popularity, however, and in 2004 the event sold out for the first time with an audience of twelve thousand. In recent years, the audience has varied between six and twelve thousand people, experiencing a cast of around three hundred performers, plus support groups, technicians and production groups.

As “Beltane” has got bigger, it also expanded outwith the night itself, part of a cultural mileau which helped to spawn several performance groups which would move beyond the bounds of Beltane. Most notable was te POOKa, a performing arts charity which for many years had a symbiotic relationship with the festival, sharing personnel, headquarters and, in its early years, the name “Beltane Productions”. The charitable objectives of the Society, which in part seeks to raise awareness of the Quarter Days of the Scottish seasonal calendar, have also expanded its own performances to mark these complementary festivals. While the festivals of Imbolc and Lugnasadh have generally been small, informal affairs for members of the Society, the most established alternate celebration is Samhuinn – 31st October – when the coming of winter is marked by a public procession in Edinburgh city centre.

Despite these changes, BFS remains a volunteer-run community charity, with the performance on the night itself at its core. And, while the performance itself has grown and changed, it has firmly retained key elements – the procession of the May Queen, the death and rebirth of Green Man, the lighting of the bonfire – which provide a backbone of continuity while allowing a huge amount of flexibility within each group and each character as to how they wish to engage with and shape the story of our Festival. The Beltane fires have returned to Edinburgh in a vibrant, modern tradition which has become a world-renowned spectacle. 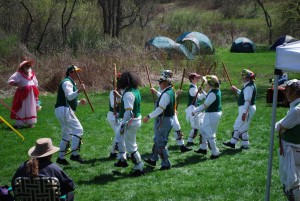 Also known as May Eve, May Day, and Walpurgis Night, happens at the beginning of May. It celebrates the height of Spring and the flowering of life. The Goddess manifests as the May Queen and Flora. The God emerges as the May King and Jack in the Green. The danced Maypole represents Their unity, with the pole itself being the God and the ribbons that encompass it, the Goddess. Colors are the Rainbow spectrum. Beltane is a festival of flowers, fertility, sensuality, and delight.

Prepare a May basket by filling it with flowers and goodwill and then give it to someone in need of healing and caring, such as a shut-in or elderly friend. Form a wreath of freshly picked flowers, wear it in your hair, and feel yourself radiating joy and beauty. Dress in bright colors. Dance the Maypole and feel yourself balancing the Divine Female and Male within. On May Eve, bless your garden in the old way by making love with your lover in it. Make a wish as you jump a bonfire or candle flame for good luck. Welcome in the May at dawn with singing and dancing.

Going A-Maying & Bringing in the May — Merry-making and Nature communion. * Midpoint between Spring Equinox and Summer Solstice. * In Pagan Rome, Floralia, from April 27-May 3 was the festival of the Flower Goddess Flora and the flowering of Springtime. On May 1, offerings were made to Bona Dea (as Mother Earth), the Lares (household guardian spirits), and Maia (Goddess of Increase) from whom May gets its name. * Roman Catholic traditions of crowning statues of Mary with flowers on May 1 have Roman Pagan roots. * Marks the second half of the Celtic Year; one of the four Celtic Fire Festivals. Complement to Samhain, it is a time of divination and communion with Fairy Folk/Nature Spirits. * Pastoral tradition of turning sheep, cows, other livestock out to pasture. * In Pagan Scandinavia, mock battles between Winter and Summer were enacted at this time. * Building on older tradition of this time being a holiday for the masses, in the twentieth century, May Day has been a workers’ holiday in many places. * Some say that Mother’s Day, in the USA, Mexico, and elsewhere has Pagan roots. 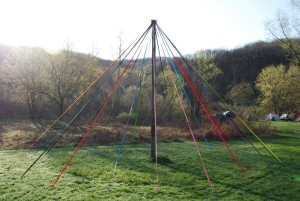 Forms include pole, tree, bush, cross; communal or household; permanent or annual. * In Germany, Fir tree was cut on May Eve by young unmarried men, branches removed, decorated, put up in village square, & guarded all night until dance occurred on May Day. * In England, permanent Maypoles were erected on village greens * In some villages, there also were smaller Maypoles in the yards of households. * Maypole ribbondances, with two circles interweaving; around decorated bush/tree, clockwise circle dances.

Gathering and exchange of Flowers and Greens on May Eve, pre-dawn May Day, Beltane. * Decorating homes, barns, and other buildings with Green budding branches, including Hawthorn. * Making and wearing of garland wreaths of Flowers and/or Greens. * May Baskets were given or placed secretly on doorsteps to friends, shut-ins, lovers, others. * May Bowl was punch (wine or non-alcoholic) made of Sweet Woodruff blossoms. 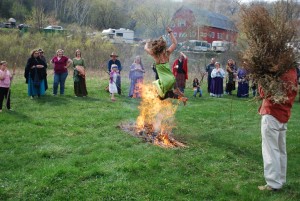 Traditionally, sacred woods kindled by spark from flint or by friction — in Irish Gaelic, the Beltane Fire has been called teine eigin (fire from rubbing sticks). * Jump over the Beltane Fire, move through it, or dance clockwise around it. * Livestock was driven through it or between two fires for purification and fertility blessings. * In ancient times Druid priests kindled it at sacred places; later times, Christian priests kindled it in fields near the church after peforming a Christian church service. * Rowan twigs were carried around the fire three times, then hung over hearths to bless homes. * In the past, Beltane community fire purification customs included symbolic sacrifice of effigy knobs on the Beltane Cake (of barley) to the fire, or, in medieval times, mock sacrifice of Beltane Carline (Hag) who received blackened piece of Beltane Cake; Maypoles in Spain were each topped with a male effigy which was later burned. Contemporary Pagans burn sacred wood and dried herbs as offerings in their Beltane fires.

Rolling in May Eve dew or washing face in pre-dawn May Day dew for health, luck, beauty. * Getting head and hair wet in Beltane rain to bless the head. * Blessing springs, ponds, other sacred waters with flowers, garlands, ribbons, other offerings. * Collecting sacred waters and scrying in sacred springs, wells, ponds, other waters.

Union with the Land focus, often with actual mating outside on the Land to bless fields, herds, home. * May Queen (May Bride) as personification of the Earth Goddess and Goddesses of Fertility. * May King (May Groom) as personification of Vegetation God, Jack-in-Green — often covered in green leaves. * At Circle Sanctuary, in addition to May Queen & May King, is May Spirit Couple, an already bonded pair. * Symbolic Union of Goddess and God in election/selection, crowning, processional, Maypole dance, feast. * Morris Dancers and pageants (with Hag & Jack-in-Green) to awaken the fertility in the Land.