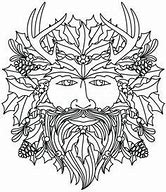 A. Sutherland  – AncientPages.com – Holly King is a character in Pagan folklore. Celtic myths describe his fight against his brother, Oak King. He presides over the six months of the year following the summer solstice.

The fight between King Holly and King Oak symbolizes the clash between the cold season (the winter period) and the hot season (the summer period). The kings remain in never-ending “battle,” reflecting the seasonal cycles of the year. It is about solar light and darkness, crop renewal, and successful growth.

The Oak King is ruling the waxing year, and the Holly King is leading the waning year, having attributes in the form of holly and other evergreens. During warm days of Midsummer, the Oak King is mighty and at the height of his strength.

These two mythical pagan figures – symbolizing the changing seasons – personify the winter and summer in numerous folklore and mythological traditions.

The Holly King must accept it and wait patiently to regain power at the Autumn equinox. Then, he has his strength peak during mid-winter.

The Oak King is reborn during this time, with a new power to meet Spring equinox and preserve the legacy. Many consider that the Holly King and Oak King story has its origin in Celtic mythology.

The Celts divided the year into two periods and made Holly King and Oak King the representatives of these two seasons. Let us also remember a clear and dark season among the Celts, thus marking the wheel of time.