Today’s Tarot card reading comes from The Celtic Dragon Tarot by D. J. Conway. With art done by Lisa Hunt. This deck is unique as the cards are never read in reverse. Pages 66 and 67 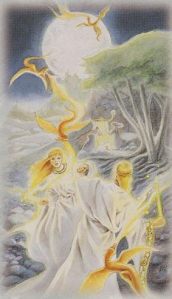 Five robed magicians (some men, some women) are battling each other with their wands. Flashes of magickal energy come from the wands, as the magicians either defend themselves or attack others. These magicians represent two types of people in the world: those who are overly ambitious and jealous of what others accomplish, and those who must learn to defend themselves against such attacks by others. Jealous people often attack those who have worked hard and gained positive things from their efforts; unfortunately it is a common human failing. Life is difficult enough (symbolized by the rocky landscape and twisted tree roots), without complicating it with unnecessary battles brought on by misunderstandings, jealousy, and twisted ethics. Only a cool head, spiritual guidance, and resistance to foes will help balanced person win the day. Tiny Air dragons dart above them, their fiery breath intermingling with flashes of energy. They represent the astral guardians who try to bring peace to such a situation.

Divinatory Meaning: Obstacles and opposition from others may complicate your life; you will have to struggle to overcome this.. Harmful gossip could damage your reputation and/or ccareer. You may find yourself in trouble with the law.

Ivy, a symbol of strength and determination to the Druids, is the twelfth letter of the ogham alphabet, gort, and the eleventh month in the Celtic tree calendar, representing September 30th to October 27th.

From The Rune Site – Gothic Runes

Sound: “e” as in “egg”
Stands for: Staff cut from a Yew Tree
Casting meaning: Aihs represents a double-ended staff of life and death cut from a yew tree. Waer symbolizes sacrifice. 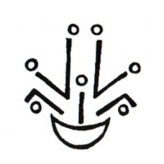 What happens during the harvest? We collect all we’ve been growing. This rune represents manifestation and reaping the rewards. Finances and security.