Click here for more information about The Wheel of Fourtune card from labyrinthos.co 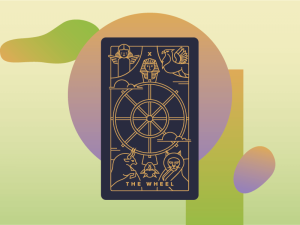 The Wheel of fortune – Major Arcana

The Wheel of Fortune is one of the most highly symbolic cards in the deck, filled with signs that each have its own meaning. At the center of the card, lies a giant wheel, covered in esoteric symbols. There are different creatures that surround the wheel; the angel, the eagle, the bull and the lion. They are related to four fixed signs in the zodiac – leo, taurus, scorpio and aquarius. These four animals are also representatives for the four evangelists in Christian traditions, which is perhaps the reason that they are all adorned with wings.

The books that each of the creatures hold represents the Torah which communicates wisdom and self-understanding. The snake indicates the act of descending into material world. On the wheel itself, rides a sphinx that sits at the top, and what appears to be either a devil, or Anubis himself arising at the bottom. These two Egyptian figures are representative of both the wisdom of the gods and kings (in the case of the sphinx) and the underworld (Anubis). They are rotating forever, in a cycle, and suggests that as one comes up, the other goes down.

There is a belief that the Norse runes bring out power the people had present within themselves. They are all connected and can interact continuously. It is not easy to recognize what a person can gain in life from them. It is the mystery that helps people heal their bodies and souls. Some of the mysteries can be found in the form of personal gains, metal surprises that can come out of nowhere, helping people and their souls in the process.

From Grove and Grotto

T stands for Tinne, or Teine, the Holly tree. This evergreen plant is connected to immortality, unity, courage, and the stability of hearth and home. Pronounced chihnn-uh by the Celts, the wood of the Holly was often used in the construction of weapons, and is known as a plant of warriors and protectors.

In the pre-Christian British Isles, the Holly was often associated with protection–planting a hedge around your home would keep malevolent spirits out, thanks in no small part to the sharp spikes on the leaves. In Celtic myth, the concept of the Holly King and the Oak King symbolizes the changing of the seasons, and the transition of the earth from the growing time to the dying season.

When Christianity moved into the Celtic lands, the new religion associated the Holly plant with the story of Jesus. The poky spikes on the leaves represent the crown of thorns worn by Jesus on the cross, and the bright red berries symbolize his blood.