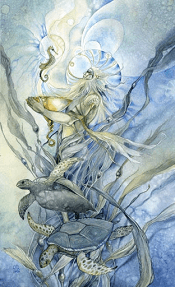 I. The meaning of the King of Cups Shadowscapes Tarot

He was a wise and sympathetic King. He understands the meaning of patience. Like the sea turtles swimming beside him, he illuminated the path along with solid tranquility, overcoming the unpredictable transformations of the vast ocean. He has read through the millennia of knowledge throughout the centuries, all of which are reproduced on the patterns engraved on the shells of those creatures, taking gulps of knowledge with every breath of the sea flowing around them. The surface of the water was calm and peaceful when the King was present. The radiance of the blue light radiated out, sparkling like see-through jewels.

Seahorses are the symbol of Poseidon’s power, imbued with the endless power of the sea. He was a creature of perseverance, swimming through rough seas at his smooth and constant pace. He dropped himself under the water. However, the politeness of a King surrounded by the outer bone and spines, should not underestimate that flair, like the male seahorses, the protector of the children of the ocean.

Like seahorses, King of Cups Shadowscapes Tarot is a protector. He cares for and watches over all those near him. He offers a drink that is capable of healing wounds, with compassion and care. His message was to let the currents flow through the blood vessels and to reach to the heart to wash away burdens. As a person who is patient, tolerant and understands that all aspects and requirements of the people around him need to be balanced.

II. The King of Cups Shadowscapes Tarot in a spread…

Our lesson is the necessity of bearing strong enforcement. Your positive aspects can be controlled by the people who surround you. To pull this rune means to get a hint that there is going to be stagnation  – an occasion to re-consider your plans carefully.  It is the time to pay off old guilt and even if it’s easy it is time to restore balance. Therefore improve, reconstruct, organize: if the fishermen cannot pull out, they repair their fishing nets. You must deal with and face your own demons. So keep your anger as well as your impulses under control.  Modesty and a good mood are essential in such times.

A great understanding is within you you only have to see. Focusing brings in a new perspective that you cant undo. You see things as they are summing up by a connection by divine intervention. A sudden realization of fate. You have the power.

T stands for Tinne, or Teine, the Holly tree. This evergreen plant is connected to immortality, unity, courage, and the stability of hearth and home. Pronounced chihnn-uh by the Celts, the wood of the Holly was often used in the construction of weapons, and is known as a plant of warriors and protectors.

In the pre-Christian British Isles, the Holly was often associated with protection–planting a hedge around your home would keep malevolent spirits out, thanks in no small part to the sharp spikes on the leaves. In Celtic myth, the concept of the Holly King and the Oak King symbolizes the changing of the seasons, and the transition of the earth from the growing time to the dying season.

When Christianity moved into the Celtic lands, the new religion associated the Holly plant with the story of Jesus. The poky spikes on the leaves represent the crown of thorns worn by Jesus on the cross, and the bright red berries symbolize his blood.

Mundane Aspects: Hang a sprig of Holly in your home to protect your family in your absence. Soak the leaves in spring water under a full moon, and then use the water as a blessing for people or items you wish to protect. There is strength to be found in standing together, and ultimately protection comes from honor and trust.

Magical Aspects: Develop the ability to respond quickly and wisely to your intuition. Learn to overcome and adapt to new situations, and to respond immediately to changes in your spiritual environment. Trust your instinct, but don’t let your heart rule over your head.

A Deluge from Heaven:
The Superior Person rains fortune upon those in need, then moves on with no thought of the good he does.

The issue must be raised before an impartial authority.
Be sincere and earnest, despite the danger.
Do not try to force the outcome, but seek support where needed.
Set a clear goal.

Your iron will must come to the forefront now.
It will take great personal determination to resolve the situation in question.
Your adversary would love to force you into an angry display.
That would legitimize his opposition to you.
Such a berserker rage would drag you down to his level.
You must resolutely take a public stand against what he represents, but refuse to engage him.
Without compromise, you show others the way to higher ground. 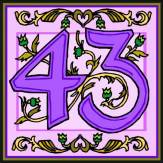 Often highly spiritual, sometimes eccentric. A hermit’s number. It also represents concentration, perfectionism, and sometimes frustrations and feelings of inferiority. Intelligent with a tendency to push conspiracy theories or otherwise upset the status quo. Can be stubborn and cynical.

Angels and Higher Powers are here with you. They support you and love you. Speak with them often in your mind, tell them your expectations, dreams or fears. Ask for help whenever you need to. They will show up always when you call them. 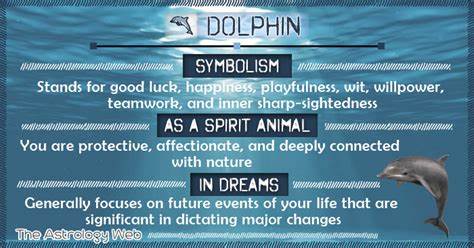 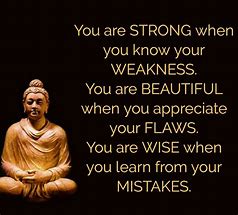